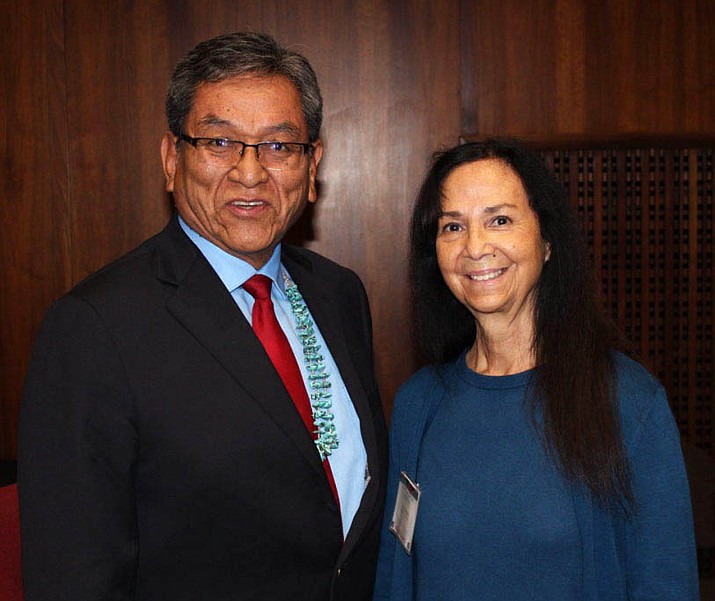 The state held its first Indian Tribal Nations Day at the capitol in 1995, and for the past twenty-three years, the event has provided Tribes with an opportunity to meet state legislators, create awareness about tribal issues and have a presence in state government.

During this year’s event, Yavapai-Apache Nation Chairwoman Jane Russell-Winiecki addressed the Arizona State Legislatures joint session. The day began with a breakfast event held at Heard Museum, hosted by the Inter Tribal Council of Arizona and the Arizona Indian Gaming Association. The breakfast featured the recognition of Tribal Leaders, guest speakers and provided an orientation for tribal delegations about protocol at the state capitol.

During her address, Chairwoman Winiecki reminded the legislature that there has been a long history of adversity and separation between the state and Tribes, and in order to create a better Arizona, both Tribes and the state must come forward with a willingness to discuss governmental differences and work together. Chairwoman Winiecki also reminded state leaders that throughout history, Tribes have been discounted and left-out of the Arizona political landscape reflecting Tribes economic disparities, social challenges and rural isolation.

Illustrating the states historical perception of Tribes, Chairwoman Winiecki shared a traditional story, whose moral and underlining theme was that being small with obvious challenges doesn’t make your contribution to the world any less significant.

“The stink bug was smaller than the coyote, but outwitted the fierce coyote. Tribes are like that stink bug, we may have had economic and social disadvantages, but look at us today. Look at our contribution to the state through gaming revenues and economic development and history and culture,” stated Chairwoman Winiecki.

Chairwoman Winiecki was joined by Chairman Edward Manuel of the Tohono O’odham Nation and President Russell Begaye of the Navajo Nation, who also addressed the joint session.

Winiecki added, “Our ultimate destiny has always been, and always will be a shared destiny, because we are all Arizonans. We have fought and died for this land more than once. We love this country and this State called Arizona. We’ve always lived on this land and will continue, doing all we can to preserve not only our culture and legacy, but contributing to its well-being.”

Chairwoman Winiecki was elected Yavapai-Apache Nation Chairwoman in 2016. Chairwoman Winiecki is a 2017 recipient of Arizona Business Magazine’s prestigious Arizona’s Most Influential Women in Business award and currently services as President of the Inter-Tribal Council of Arizona, Treasurer of Arizonans Tribal Government Gaming Association and an active member of the Apache Alliance.

--Information provided by the Yavapai-Apache Nation.