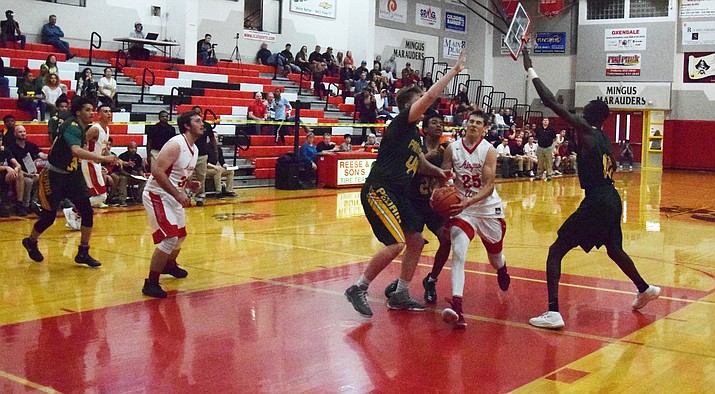 Mingus junior Chaz Taylor drives to the basket during the Marauders’ 96-82 loss to Peoria in the state play-in game on Friday night. Taylor fouled out with 5:52 left. (VVN/James Kelley) 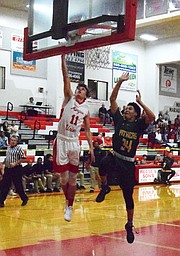 Mingus junior Chase Saczalski lays the ball up during the Marauders’ 96-82 loss to Peoria in the state play-in game on Friday night. Saczalski scored a game high 34 points. (VVN/James Kelley)

“It was a difficult week, we lost one of our starters to an off court decision and these guys came in here and beat us, there’s not a whole lot else to say,” said Mingus head coach Dave Beery. “We had a chance, we had a 10, 12 point lead, we just had some really untimely turnovers, they definitely beat us up inside and they were really athletic gifted team and they out played us (Friday) night, they were real consistent.”

Senior guard Martin Soria was suspended and senior center Kyren Kirton was injured. The Marauders only had one day of practice without Soria.

Mingus Union led 21-14 after the first quarter and by as much as 13, midway through the second, before the Panthers took over.

“We came out alright, hit some good shots, hit a lot of 3s, then they ramped up defensive pressure and double teamed the ball handlers and they got a lot of steals and we turned the ball over a lot,” said senior forward Alex Figy. “So we were our own enemy (Friday) night.”

Peoria chipped away at the Mingus Union advantage in the second quarter and cut it to 42-41 at the half. Then with 6:55 left in the third quarter, they took the lead, 46-45.

Mingus Union scored 20 or 21 points in every quarter but the Panthers had at least 26 points, 29 in the third quarter, after scoring only 14 in the first.

Beery said he thinks the Marauders didn’t value every possession in the second quarter.

“We had some pretty soft turnovers, gave them the ball in the spots where they had some opportunities to get some easy transition buckets,” Beery said. “There were a few minutes where it looked like we didn’t have anybody that wanted the ball in their hands. Our guys were playing a little bit I don’t know, intimidated or something.”

The Panthers built the lead up to double digits in the fourth quarter and then junior guard/forward Chaz Taylor fouled out with 5:52 left and Figy fouled out with 4:11 left.

“It was tough, I was sad that it had to end that way but it is what it is,” Figy said.

Peoria also had a player foul out.

Figy agreed that the game was called tighter than the regular season.

“Yeah, I feel like tonight it was a little bit tighter, they called a lot more offensive fouls, just tighter things that they wouldn’t normally call during the regular season,” Figy said. 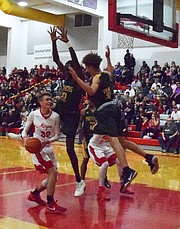 Mingus junior Colton Sorensen looks to get a shot off during the Marauders’ 96-82 loss to Peoria in the state play-in game on Friday night. The game was Mingus Union’s first home playoff game in years. (VVN/James Kelley)

Even without a couple key players, the Marauders didn’t let up, cutting the lead to single digits multiple times in the fourth quarter and it was 84-76 when they had to start fouling with 2:00 left.

“I thought the officiating was really consistent,” Beery said. “It’s a little more physical in the playoffs and we knew that. We talked about that coming in, that’s nothing new, so I think our guards just got a little tired, didn’t take care of the ball quite as well as they did earlier in the game. I’m really proud of the way these guys finished, they didn’t quit, we kept coming back. We had a chance to roll over and let them win by 20 and instead we kept coming at them but it wasn’t enough in the end.”

“Overall I’m really proud of these guys,” Beery said. “We came out of the summer looking at ‘gee, it would be great if we were a couple games over .500’ and these guys obviously exceeded that, getting a home playoff game since, I don’t know, 2002 or something like that,

Figy said they did really well this season, surprising people.

“I thought our season went really well,” said Cramer, who had eight points against Peoria. “I’m happy with pretty much everything that happened It was a fun year We lost some games that we shouldn’t have lost but we won some pretty good ones and we finally swept Flag, so that was good.”

“I’m really proud of my seniors,” Beery said. “We talked about ‘you don’t want to walk off the court in your last game wishing you had played harder’ and I don’t think any of them are going to feel that way.”