Double Team: Siblings share number and success on the hardwood for Camp Verde 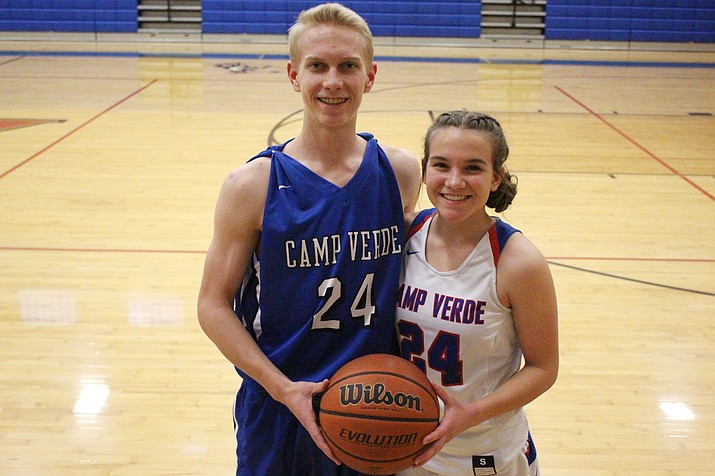 There was a double dose of 24s for Camp Verde High basketball this season.

This year sophomore Tanna Decker of the girls team opted to change her jersey number from 30 to 24 in honor of her brother’s last year on the boys team.

“It was his last year so I was like ‘let’s match!’ (laughs) so I changed it (laughs),” Tanna Decker said.

Although he didn’t mean to pick it usually, he always seemed to end up with 24, except for the start of high school when upperclassmen picked the numbers first. But in middle and elementary school Chase Decker was No. 24.

“It just kinda happened that way, I don’t know, it wasn’t even like I chose it,” Chase Decker said. “This year I chose it but the other years it just happened to be the number I’d get, so it was kinda cool, so I kinda just stuck with it.”

While Tanna Decker has been prominent for the varsity girls team both season, Chase Decker emerged as a starter this year after rarely playing as a freshman on JV.

“I feel like from my freshman and sophomore year I’m like a whole new player compared to like my junior and senior year, just playing a lot more tournament teams and like practicing by myself and with her and with our shooting coach Paul Hoover, he’s like probably the number one shooting coach in Arizona and he’s really helped us both shoot a lot better,” Chase Decker said.

Chase Decker lead the Cowboys in minutes this year. Meanwhile his sister has played in all 30 games so far this season and is third in points and field goals made.

Chase Decker said his sister needs to shoot more though.

Chase Decker said he’s excited to watch his sister play and that she can end up as one of the best girls point guards in the state.

“It’s kinda hard because like a lot of my friends are like ‘oh you’re sister’s better’ than me (laughs) and stuff like that, but it’s true though,” Chase Decker said. “Like if you compared me to guys and you compare her to girls, respectively, she’s better but of course like just comparing us to each other, then obviously I’m going to win just cuz I’m bigger and stronger but compared to how she does in games to how I do in games, I think she’s definitely doing a little bit better than I am.”

Tanna Decker said that while it was fun to watch her brother do well this year, it is sad that it is his last in high school.

“I got into it because Chase started doing it and I noticed that my dad was really into it so I started playing (laughs),” Tanna Decker said about basketball.

The siblings play one on one against each other.

“I’ve noticed them more in some of the rural communities in the east, where is a lot of families that have a lot of history on the teams,” Showers said. “I’m sure we’ve had it here, but not as often I had a kid some years ago, Cassi Spleiss, whose brother Jake played on the boys team but they were a couple of years different.”

Jake Spleiss served as an assistant coach on the boys team this year.

“Some brothers and sisters, depending on their relationship pull each other along, motivate each other and I know my son and daughter, they were more that way in track,” Showers said. “My son was a freshman and my daughter was senior, they kinda motivated each other.”

As for her number, Tanna Decker said she will keep 24 next year.