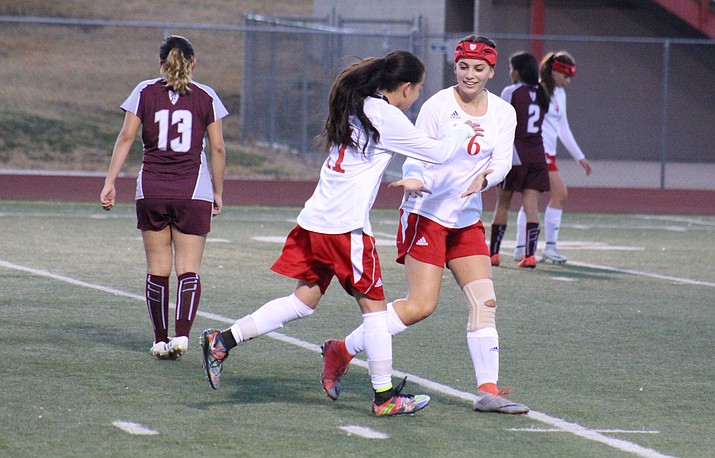 “Our play in the Region was a bit disappointing, so it reflected in the awards,” said Mingus head coach Joe Rongo. “I was lobbying for Marli Ureta (20 goals 5 assists) and Felicia Bueno (13 goals 16 assists) to make first team but due to our team standing they both only received second team recognition.

Rongo had hoped Behlow would make the second team after she had three goals and 10 assists. He said she is a “great box to box player.”

“Zoey Arwine was another player I was pushing for second team, she averaged 9-10 saves a game, but our defense leaked too many goals so she didn’t receive the recognition I was hoping,” Rongo said.

He also thought juniors Ginessa Altamirano and Caitlyn Card should have got honorable mention.

“Moving forward, the team has opted to move forward and train year round as we signed up for club ball,” Rongo said. “It’s our coaching staff’s opinion that lack of touches on the ball and team communications is what hurt us the most. So we’re trying to remedy that situation.”

Flagstaff had seven all-region players, six on the first team and another one that was honorable mention.

The Eagles earned the No. 1 seed in the state tournament and reached the final. Prescott also made the semifinals and they both lost to eventual state champion Tucson Salpointe Catholic.

“The region has always been tough,” Rongo said. “Back when Mingus won state in 2010 they beat flagstaff in the final and lost to flagstaff add in the final in 2008. But this year five out seven teams made it to state and three were in the top 10.”

Rongo said this season was a good foundation with re-developing a girls soccer program at Mingus.

“I want to thank the team trainers for all their work this season too, Phil VanGorp was the JV coach and worked with individual touches, Jesse Rongo worked on movement without the ball, and Alexis Nevitt helped with distribution of the ball,” he said.