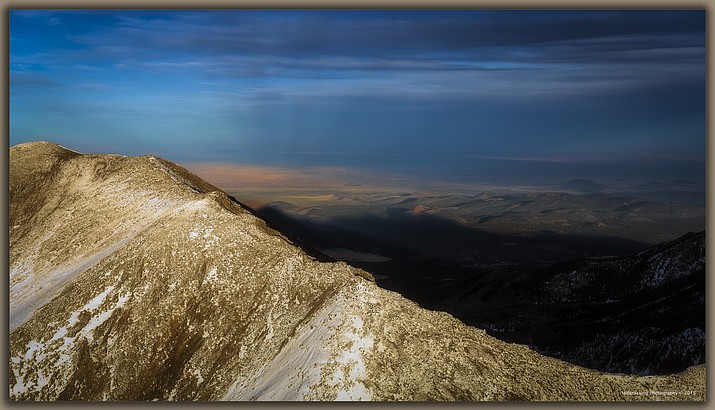 Early evening is one of my favorite times to be cruising the peaks with all the beautiful shadows and the low angle light warming all the colors and so it was on Saturday when I headed up there just before sunset. I was cruising the ridgeline from Agassiz Peak to Humphreys Peak. Humphreys Peak is on the far left of the image and at 12,633’ is the highest point in Arizona. I was at 12,673.6’ when I took this image … love the built in GPS in the Canon 5D Mk IV as I have not only the coordinates for each shot, but the altitude and that allows me to return to the same place and get the same angle of shot on later dates … that is if I ever decide to do that, and in the last year and a half since I got it, it has not happened. Somethings are best left to intuition.

The Painted Desert is lighting up behind Humphreys and just right of mid center you can see Sunset Crater just above the shadow of the peaks. Meriam and North and South Sheba volcanic cones are near the right side just above center. It is the lava flow from Meriam that altered the course of the Little Colorado River and as the river came around the flow it eroded the landscape and thus was Grand Falls formed … it’s out there somewhere about 12 miles from Meriam … can’t quite make it out.

So another week is underway and I’m breaking records getting this out around midnight … have a terrific book by John Nance, I want to get back to … Fire Flight … highly recommend it if you like flying, action, excitement, some romance and all that stuff.

Have a beautiful day … it will be the only day you have today … so smile and help others have a good day too.

I bring but this one common thought, my life has wrought;

That from the dregs of drear despair, still everywhere

There is a joy I yet may sip – Tis comradeship

With all mankind, the high and low