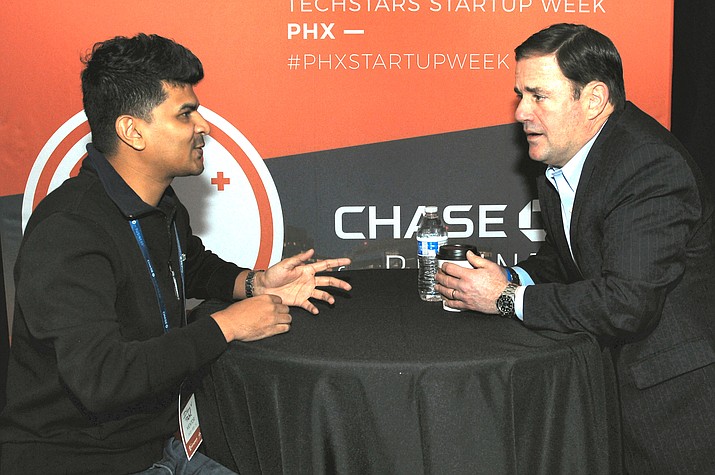 Gov. Doug Ducey does some "mentoring" of Dhruv Patel Tuesday at an event for entrepreneurs. Patel is the owner of a new firm that helps small businesses establish their own web sites. (Capitol Media Services photo by Howard Fischer)

PHOENIX -- Three years into office, Gov. Doug Ducey said Tuesday he has no clear idea of how to prevent mass shootings at schools.

But the governor said he does believe in two things: Protect the Second Amendment and don't "politicize'' the massacre at the Florida high school.

Speaking to reporters a week after the gunman killed 17, Ducey said he could provide no guidance on what changes in laws are necessary to prevent similar shootings here.

"These are issues that are going to require more than one governor, one state to participate,'' the governor said when asked about the lack of any formal policy from his administration to deal with gun violence. "I think you're going to have to have law enforcement, education, school leaders around a table, discussing about, one, how these things happen, what the consistencies were, and what changes in law or policy would have avoided them, or would have stopped them.''

That's precisely what 50 of the state's 90 lawmakers are asking from Ducey.

In a letter sent Monday, the legislators -- mostly Democrats but some Republicans like the governor -- called on the governor "to act quickly, decisively and compassionately'' to protect Arizona school children by convening a task force to prevent potential school violence.

The signers suggested the panel should include parents, teachers, school administrators, counselors, law enforcement and behavioral health professionals and be charged with finding way to identify students "at risk of inflicting violence upon others and protocols for interventions to safeguard our children.''

Ducey said Wednesday he had not yet seen the letter.

"I'll be in contact with legislative leadership and we'll be talking about what next steps can happen,'' the governor said.

Ducey's promise Tuesday to work with all parties to deal with the problem is hardly new.

In 2014, when he was running for governor, the Arizona Republic asked candidates what they would do to prevent future gun violence. At the time he promised to work with mental health experts, the firearms community and law enforcement"to make sure that any programs brought forward will reduce violence and not infringe on the Constitution.''

On Tuesday, the governor sidestepped repeated questions about the fact that, to date, the only consistency in his actions has been to sign measures to loosen state regulations of guns.

For example, he signed legislation allowing weapons on public rights of way through campuses. He also penned his signature to one law requiring cities to sell off weapons used in crimes or surrendered rather than allowing them to be destroyed.

And Ducey gave his blessing to yet another which forbids the state from telling people they can only purchase "smart'' guns which can not only be tracked but also can be programmed to fire only if held by the person to whom it belongs.

In each of those situations -- and again Tuesday -- Ducey said while he wants to protect public safety he also wants to ensure that Arizona does not impinge on the Second Amendment right of people to bear arms. He said the focus needs to be on what he sees as the real problem.

"We want to make certain that these don't get into the wrong hands,'' Ducey said. "And I think what we've seen here is whether it's a felon or a criminal or someone that's mentally ill, if we can keep guns out of those hands, we'd like to do that.

But Ducey just last year signed legislation that specifically prohibits background checks any time any sort of property is sold.

On paper, that law does not refer to firearms. But Rep. Randall Friese, D-Tucson, sought to cut to the core as the measure was being debated.

"No one is talking about background checks for refrigerator sales or microwave sales or dining roomm furniture sales,'' he said. "Let's just be serious.''

That law also adds teeth to prohibitions against local gun ordinances, like one previously approved in Tucson, to require background checks when weapons are sold during gun shows on city property. That ordinance was designed to deal with what some call the "gun show loophole,'' as federal laws requiring background checks on purchasers -- checks that look for criminal or mental health history or other flags that show people should not be allowed to own a weapon -- do not apply in person-to-person sales, even if an individual may be regularly engaged in such sales.

"I think that we can look at the background check system, state by state,'' Ducey said when asked about his signature on the 2017 legislation.

"But this is really a national issue because we have reciprocity across state lines,'' he said.

The letter from lawmakers comes on the heels of the latest mass shooting at a Florida high school that left 17 dead. Since that day groups of students have pressuring legislators and Gov. Rick Scott who, in response, insisted that "everything's on the table.''

"I think they're very persuasive,'' Ducey said Tuesday about the students.

But the governor, while saying he wants to see our schools as "a place of learning and safety,'' he also said "we shouldn't politicize this.''