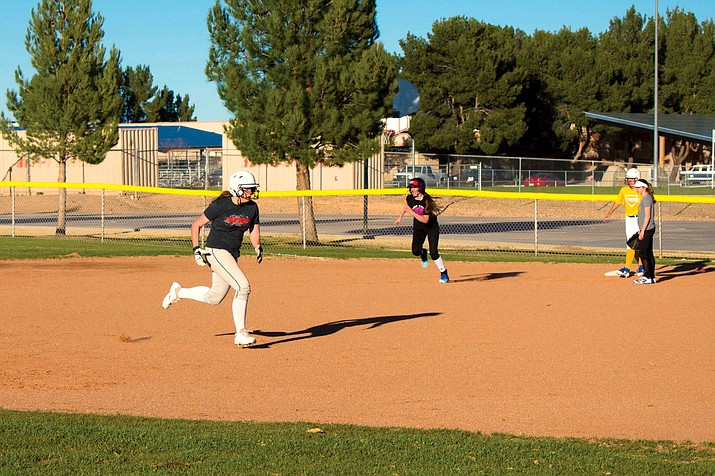 Camp Verde softball players practice running the bases on Tuesday afternoon. The Cowboys, who were a state semifinalist last year, opened the season with a 14-2 run rule win at Mayer on Wednesday. (VVN/Halie Chavez)

With some fresh faces and returning stars, Camp Verde High softball is ready for another deep playoff run.

After the Cowboys made it to the state semifinals last year and the state championship game in 2016, they start this season confident.

“We’re looking pretty sharp,” said head coach Henry Smith. “We have tons of room to grow, a lot of young talent, we have a few freshmen starting, infield and outfield, very positive attitudes, all of them are motivated, they’re all willing to buy into our coaching style, so it’s pretty exciting to get the season started.”

“We’re a lot more dedicated and I think we’re ready to work as a team,” Tyra Smith said.

Henry Smith was section or coach of the year three of the last four seasons, including last year.

The Cowboys opened the season with a 14-2 win at Mayer on Wednesday.

“The biggest thing we’re focused on now is staying disciplined and understanding the situations and I think that for the most part, although they’re very young, they have a good understanding of kind of more or less a baseline of where we need to be and will just continue to grow from there,” Henry Smith.

Leading the way for Cowboys is Finley, a sophomore pitcher. Last year she a 2.43 ERA and struck out 165 in 118 innings.

Henry Smith said that although she worked hard in the offseason, they don’t want to over work her.

“She worked all offseason, she worked with us and on our club team, our offseason team and she did well, no problems what so ever,” Henry Smith said. “We intentionally kept her from over working herself, as long as she is playing us we’re always going to make sure that her arm stays healthy. She’s coming into the season 100 percent. My goal is to always make sure that we take care of her arm I think she has a bright future, a long future with college and onto whatever level she wants to take it too. We’re always conscious of her arm and making sure that she stays healthy.”

After tying for third in the state last year, Camp Verde softball players are looking to go even deeper in the state tournament this year. (VVN/Halie Chavez)

“Right now we have three freshmen starting on the infield,” Henry Smith said. “The good thing about that is that we have a lot of years to get them where we want them to be and also they spent all two years playing for us, in our offseason program so now that the time is here, they spent two years waiting for this moment and they worked hard for it, so they’ve earned those infield positions and I’m excited to see them we should see a few more double plays than last year, we should see a few more extra effort plays than we have in the past, so that’s the group that we have now, is extra effort, they’re willing to do that to be successful.”

Last year the Cowboys led No. 1 seed Bourgade Catholic in the state semifinals before losing.

Tyra Smith said they’ve talked a lot about the ending to last year and that they will fix it.

“We’ve talked about that a lot, like in the beginning of the season we all made the statement like ‘we all want to go to the state championship this year and we want to take it all’ we don’t want to be like semifinalist, we want to be that championship team,” Oium said. “We want to work as hard as we can to get there.”

“This year I think we’re a lot more committed and dedicated and we’re ready to make it to State and do our best,” Tyra Smith said.