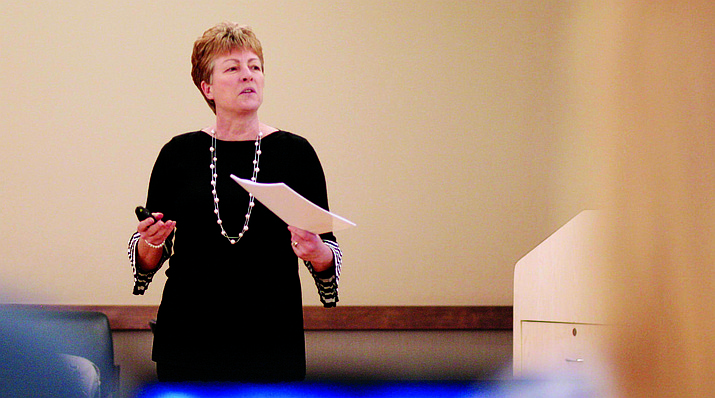 Lynn Leonard, business manager at Mingus Union High School District, tells the Advisory Committee for Consolidation that a consolidation and unification of the two districts could cost more than the possible savings in the elimination of jobs. (Photo by Bill Helm)

COTTONWOOD – On more than one occasion, former Mingus Union board member Andy Groseta has said that at least $1 million in redundancies could be redirected into the classroom if Cottonwood-Oak Creek and Mingus Union school districts were to consolidate into one district.

Tuesday, business managers from the two districts told the Advisory Committee for Consolidation that there would be no savings in a merger.

At least the way they see a merger taking place.

According to David Snyder, director of business services for the Cottonwood-Oak Creek School District, the results of Tuesday’s presentation are “one way to consolidate a district.” This is a sentiment agreed with by consolidation committee member Jason Finger.

“I fully understand that this is one scenario that is possible for a unified district. I also did not expect to see a great deal of cost savings in their report, because they were not tasked to look for savings or to specifically cut costs in administration,” said Finger, also a Cottonwood-Oak Creek board member. “I view this presentation as a good starting point for further discussion.”

Pros and cons of unification

Board presidents for Cottonwood-Oak Creek and Mingus Union school districts directed their business managers and their superintendents to create an organizational chart of a unified school district which would identify positions that would be added and/or eliminated, assign “reasonable” costs/savings, investigate potential legal costs of unification, analyze any impact of tuition costs for Clarkdale students attending high school, and to analyze any impact on property tax rates due to unification.

Snyder and Mingus Union Business Manager Lynn Leonard said in their conclusion that the estimated cost of merging the two districts could be more than the possible savings in the elimination of jobs.

The conclusion also pointed out a “10- to 15-year impact” affiliated with capital assets split with Clarkdale-Jerome School District, as well as an undetermined annual cost to equalize classified salaries and one-time costs for legal fees and infrastructure change to merge the districts.

These figures represent a sizeable difference from former Mingus Union board member Andy Groseta’s estimated savings in consolidating and unifying the two districts.

In February 2017, Groseta first approached the two school districts about merging. Thursday, Groseta said his pro-consolidation group does “not agree with their analysis.”

“It also appears that there would be only a minimum reduction in positions – 2.5 FTE’s – resulting in very little cost savings,” Groseta said. “It appears that what little if any savings they would achieve would be sprinkled out throughout the system to retain current positions. It looks like that they are searching for a way to retain jobs and not to become more efficient resulting in a cost savings, where those dollars could be re-allocated into the classroom.”

Also Tuesday, the consolidation committee agreed to see if Dr. Jack Keegan would engage in conversation regarding consolidation/unification information he generated while at Mingus Union.

“I would like Dr. Keegan to look at the report [completed by Snyder and Leonard] and to get his feedback,” Finger said.

The $2,000 fee would be capped at a limit of $1,000 from each of the school districts, said Jim Ledbetter, consolidation committee member and Mingus Union board member.