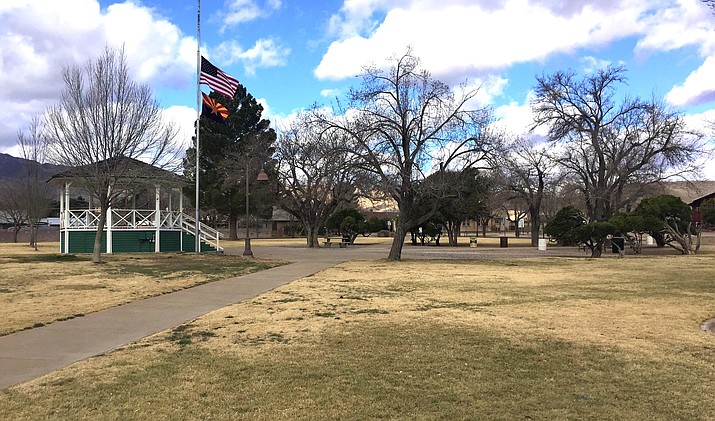 CLARKDALE – Four of Clarkdale’s parks will require soil remediation, according to soil sampling conducted over the past several months, including the Clarkdale Town Park on Main Street.

The Town Park is categorized as a “Tier 1” property under the Arizona Department of Environmental Quality’s Voluntary Remediation Program. The soil beneath the grass exceeds residential clean-up levels for arsenic and lead. Freeport Minerals has scheduled the Town Park as the first park of four to be remediated, as the park is commonly used by children.

The gazebo and other permanent structures will remain in place. The historic appearance of function of the park will not be altered by the soil replacement.

The sand in the playground area at the Town Park was found to have concentrations of metals “below ADEQ’s residential clean-up levels” and will not require remediation.

The park is expected to be fenced off March 2 to begin the project, which is estimated to take 10 to 12 weeks.

“Freeport understands the importance of the Town Park as a center for community activities, and they are working closely with the Town to develop comprehensive remediation plans and move the project forward as quickly as possible,” Town Manager Gayle Mabery said.

Mabery also said the goal is finish the project before summer festivities, but will work with event organizers to “explore alternatives” if they are displaced by the project.

Centerville Park (599 Calle Carrillo), Selna Ballfield (701 Second North Street) and Mongigi Park (700 Main Street) had “sampling results that were relatively consistent with the results seen in nearby residential areas,” according to Mabery. As a result of the sampling, the three parks will also be remediated.

Caballero Park, the fifth park within the study area, will not need remediation.

Freeport Minerals initiated the United Verde Soil Program in Clarkdale. Freeport is covered the cost of the project and restoration of the parks.

The Town of Clarkdale “may also elect to make (and fund) other upgrades to the Town Park, or to other park properties, before or after Freeport’s remediation activities at those sites,” according to Mabery.

Discussion and approval of the Soil Removal Access Agreements for the Town’s parks will be on the agenda at the February 27, 3 p.m. Council Meeting at the Men’s Lounge of the Clarkdale Memorial Clubhouse.