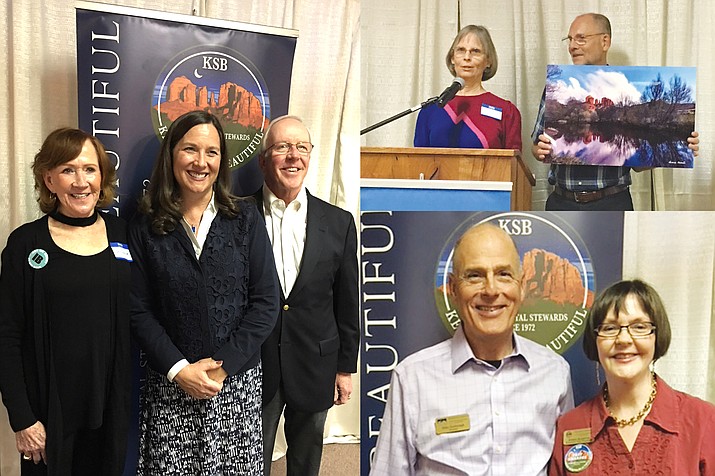 The Village shone brightly this year at Keep Sedona Beautiful’s (KSB) annual Awards of Excellence, recognizing two Village of Oak Creek couples whose activities have contributed significantly to our community.

Executive Vice President Joanne Kendrick kicked off the event recapping KSB’s many 2017 accomplishments including lifting litter on 70 miles of Sedona & Village roads. KSB President Mike Yarbrough honored the passing of Jim Eaton, a KSB past president, board member and very active community leader, repeating what Jim often stated, “KSB’s Awards of Excellence are one of the best things KSB does.”

• Darcy Hitchcock and Dale Graham received an award for “Environmental Stewardship” because, as President Yarbrough noted, “since moving to Sedona, Darcy and Dale have been speaking out effectively and passionately about sustainability in our community. This award demonstrates that in their own lives Darcy and Dale put into practice the principles they have been promoting, building a home that is a model for sustainable building practices. To every extent possible, all materials used for their home came with certified sustainable labeling, Dark Sky compliant outdoor lighting throughout with many of the fixtures, countertops and lighting coming from recycled materials or found in used goods stores.”

• Don and Jan Groves received an award for “Excellence in Community Service.” The Groves have been instrumental in revitalizing the Big Park Community School, spearheading the effort to pursue certification as an International Baccalaureate program. Yarbrough noted, “not only was the involvement of the Groves focused on the substance of this program but they also became spokespersons to businesses and the community to raise funds for this endeavor. They have raised funds for teacher training as well as annual fees for the International Baccalaureate Program. Don and Jan have worked tirelessly and selflessly to promote the school and benefit the children and the community as a whole.”

The other two awards went to Sedona area businesses:

• CVS Pharmacy Sedona for “Excellence in Dark Sky Lighting,” with Pres. Yarbrough noting that “CVS’s outdoor lighting is a model of dark-sky compliant lighting, using light only where and when needed.” The award was presented to CVS Pharmacy Manager Julie Frame and CVS Store Manager Rosemary Ramirez.

• Courtyard by Marriott Sedona for “Excellence in Architecture and Design” based on “their attractive and interesting landscape design that incorporates both native plants and native materials that blend with and complement the surrounding natural National Forest environment.” Accepting the award were Bill Tonnesen, landscape architect and project contractor, with Margaret Radford and Yvonne Estrada representing the Sunridge Hotel Group, property owner/developer.

A number of local dignitaries were in attendance, including Sedona Chief of Police David McGill (a Village resident), many Sedona City Council members, Yavapai County Supervisor Randy Garrison, Coconino County Supervisor Matt Ryan and Chamber of Commerce CEO Jennifer Wesselhoff. Although US Congressman Tom O’Halleran could not attend, as a past KSB President he recorded a video emphasizing KSB’s efforts to “protect our public lands and preserve the natural beauty of our country.”