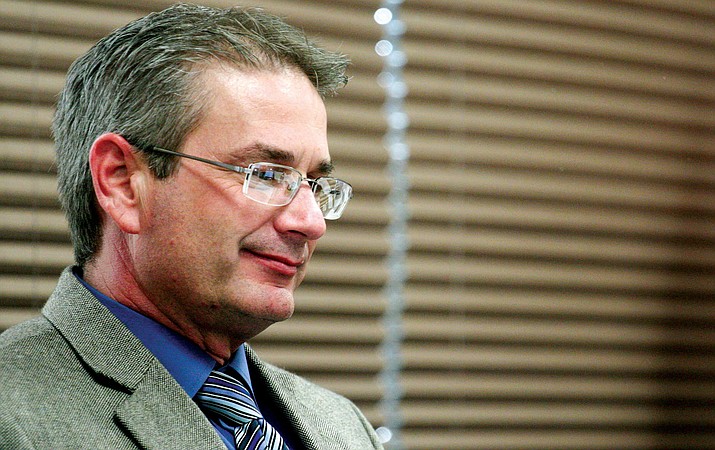 VERDE VALLEY – Most Arizona educators would say that the Copper State is the forgotten state when it comes to money allocated to schools.

But ask Tim Carter about public education in Arizona, and he says there are a lot of good teachers “in the trenches,” and they are there “for the right reasons.”

“There’s a lot of people in K-12 schools working hard with our kids, people who are tremendously dedicated,” says Carter, Yavapai County school superintendent. “When you’re passionate about kids, you wake up every morning ready to do your best.”

For Carter, that student-centric mindset is something he thinks fondly of this past year, as well as something he looks forward to as the county’s school districts move into 2018.

But the Verde Valley’s education theme for 2017 just may be change.

What matters in this world of change, Carter says, is “how you handle the change.”

Three of the community’s five school districts have new superintendents, with two of those three, Clarkdale-Jerome and Cottonwood-Oak Creek, with first-time bosses.

Clarkdale-Jerome Superintendent Danny Brown came from Humboldt Unified School District, where he had most recently served as director of Federal Programs and School Improvement.

New C-OC Superintendent Steve King didn’t have as far to travel for his new position – just down the hall – as he had worked the prior two years as assistant superintendent to Barb U’Ren, who retired on June 30.

King also didn’t have to travel far to consider big changes in his district, as he has led a series of public meetings to disseminate and solicit information connected with the possible merger of three of his schools – K-2 Dr. Daniel Bright School, grades 3-5 Cottonwood Elementary School, Cottonwood Middle School – into two K-8 schools.

At Camp Verde Unified, the change is coming ‘round the corner, as Superintendent Dr. Dennis Goodwin recently announced that he will not look to have his contract renewed when it expires on June 30.

For much of the current school year, the Camp Verde school board discussed the process to extend Dr. Goodwin’s stay in Camp Verde.

With no offer – and really, no official discussion – Dr. Goodwin offered his letter of no return at the board’s Dec. 12 meeting.

Within the five districts, there are new principals at three schools: Steve Doerksen at Clarkdale-Jerome, Katrina Sacco at Beaver Creek School, and once (or if) Mingus Union’s board approves a recommendation from first-year Superintendent Dr. Penny Hargrove, Genie Gee would become principal, and replace Dr. Hargrove, who then would serve in a singular capacity as district leader.

Though Hargrove was hired earlier this year as district superintendent at Mingus Union, she was notified before her first day on the job that she would also replace outgoing principal Jennifer Chilton.

The more that things change, the more they stay the same.

New to Clarkdale-Jerome School District after a career over the hill at Humboldt Unified, Superintendent Danny Brown looks back at successes in the first half of his first year at his new district.

• We have increased our communication more this year with parents, families and employees.

• We have an increased Facebook presence, are utilizing a robo-call system, and monthly communication letters from the superintendent go home to our families.

• We have created an Indian Education Committee to better collaborate with the Yavapai-Apache Nation to find ways to create success for our Native American students.

In her first year as Mingus Union’s district superintendent, Dr. Penny Hargrove looks back at the following successes from 2017:

• Multiple grant awards, such as:

• Gear Up grant for all seniors

• Mingus Connections, the Lane Family Grant which provided about $7,900 for welding, digital film, art and automotive.

• Highly successful recruitment of new teachers, administrators and support personnel that are making a strong positive impact on all aspects of learning and plant operations

In his first year as district superintendent, Cottonwood-Oak Creek’s Steve King looks back at some highlights from a few of his district’s schools:

• Cottonwood Middle School “is pleased with the increased opportunities in their elective offerings, their STEM Grant of the Future through Arizona Public Service, as well as some funding through the Yavapai County Educational Service Agency for teacher projects.”

• Mountain View Preparatory “is excited about their new principal for the 2018-19 school year and it is bittersweet to see the retirement of Stephanie Jones, the first and longtime principal of MVP.”

• Dr. Daniel Bright “is happiest about the embedding of Capturing Kids Hearts in the district, as well as the collaboration with Spectrum Healthcare in the New Year.”

• Oak Creek School is “happy about the kids we serve, our letter grade of a B, and the Robotics team being regional champion and going to state. Looking forward to rebuilding the greenhouse and expanding the STEM/Ag programs.”

At Cottonwood-Oak Creek schools, it’s all about capturing kids’ hearts.

Says Jessica Vocca, principal at Cottonwood Elementary School, the Capturing Kids Hearts program has made a big difference the two years since the program was first implemented.

Disciplinary actions are “down by 40 percent, and suspensions down by 85 percent,” which Vocca calls “a drastic drop in bullying behaviors.”

“We all work as a team and tackle any issue coming our way,” says Vocca. “Also, we have incorporated a Focus Zone for kids who struggle with behaviors at school. Students have the opportunity to practice mindfulness. This is particularly important for students with disabilities and ADHD.”

-Moving past issues of past relationships.

“This year, our teachers have taken collaboration to yet a higher level,” says Jamie Woodward, Cottonwood-Oak Creek School District’s curriculum coordinator. “Since August, teachers have been meeting monthly with district-wide leadership teams to collaborate with the purpose of improving student achievement, engagement and supports.”

Woodward says that the district formed the committees with the “whole child in mind, and include content areas like reading, mathematics, science and social studies, but also include social-emotional learning, community outreach, English language development, technology and meeting the needs of high achieving students.”