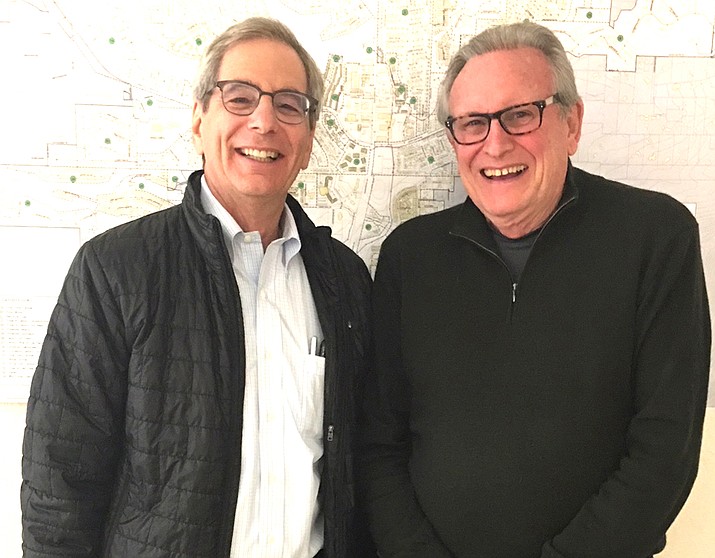 Everybody wants to know what’s going on with the space we’ve known as Oak Creek Factory Outlets Mall. Although it still looks pretty much the same – a lot of vacant storefronts – that will change soon and it’s now called Sedona Vista Village.

There have been lots of rumors about what’s going to be built or moving there. It’s location is considered “the money corner” in real estate; it’s the first commercial retail corner on your right as you‘re driving north into the Village on SR179, the Red Rock Scenic Byway. But for more than a decade it has not lived up to its location reputation.

Some of the rumors were put to rest when the developer, Marty Aronson, spoke to the community at Big Park Council’s December meeting about what to expect in the next 12 -18 months. Aronson, a good speaker who knows his subject, charmed his packed audience of Council reps and citizens attending. He started his presentation where all good stories begin – at the beginning – and told us how this area stole his heart.

Marty Aronson started out in Wisconsin, a Packers fan, and he still remembers his first trip here in 1978. He exited I-17, came around that bend in the SR-179 road, you know the one, when a panoramic view of majestic red rocks suddenly appeared and he remembers saying “Wow.” He knew he’d be back.

In 1985 he moved his family with TWO toddler daughters to Phoenix and soon after started renting a cabin near West Fork. They rented for 20 years with his girls growing up hiking & loving the area.

In 2013, he bought a second home in Uptown Sedona and for four years, on his way to & from Phoenix, he drove SR179, passing the Oak Creek Factory Outlets, seeing the Mall slowly deteriorate. He saw an opportunity to do something really special with the Mall space and he finally closed escrow on Feb. 22, 2017.

Building permits were filed first and then it was time to make room for the new Element Hotel, part of the Westin/Marriott Hotel group that’s going in the northeast corner.

This meant Tuesday Morning (TM) had to move to another part of Sedona Vista Village. TM took that as an opportunity to expand their footprint and Aronson reports their business is booming. Speakeasy Restaurant & Majestic Theatre also opened in late Fall and Aronson urged his audience to check out and support this unique & exciting addition to Sedona Vista Village.

The Element Hotel describes itself as “Influenced by nature” with a “smart, environmentally-friendly design” that maximizes space. Demolition for building the Hotel should begin in Jan. 2018, with new construction starting soon after.

As part of Sedona Vista Village’s community commitment, some of the demo materials will be donated to Habitat for Humanity. Other construction includes a new premium roof, new LED, dark sky compliant lighting and in Summer 2018, updating the entire perimeter trim & signage, compatible with the Red Rock surroundings.

Confirmed retail tenants are the current ones: Tuesday Morning, Verizon, Kitchen Collection and Famous Shoes. But effective Jan. 2018, the L’EEGS Hanes Bali Playtex Store will not be there. (This was not Aronson’s decision but a L’Eggs corporate decision to consolidate stores.)

Other tenants are being pursued, including four potential restaurant outlets, at least one with outdoor dining, to open summer or early fall of 2018. The goal is to have construction and all tenants in place by Spring 2019. However, Aronson reminded us, all building projects have unexpected factors and these timelines could change.

Aronson’s vision for Sedona Vista Village is to “make the community a better place” and he sees that happening in three ways:

• First, remove the eyesore that was a deteriorating mall and put something beautiful and functional in its place. More of the conceptual design is on their website: sedonavistavillage.com. Click on “Leasing” and scroll down to the PDF document called “Retail & Restaurant Development.” Some drawings show white on storefront trims and that will be replaced with more muted color. The Hotel depicted is a stock rendition, not exactly how it will look here.

• Thirdly, contributing to the walkability of the Village, now the goal of new retail developments. Sedona Vista Village is ideally situated for walking to everything nearby. “Sedona’s so spread out, but everything is walkable in the Village; it should be promoted and encouraged.”

Last but not least, Sedona Vista Village has a great website where you can keep updated and learn more. Go to sedonavistavillage.com and check it for further developments.