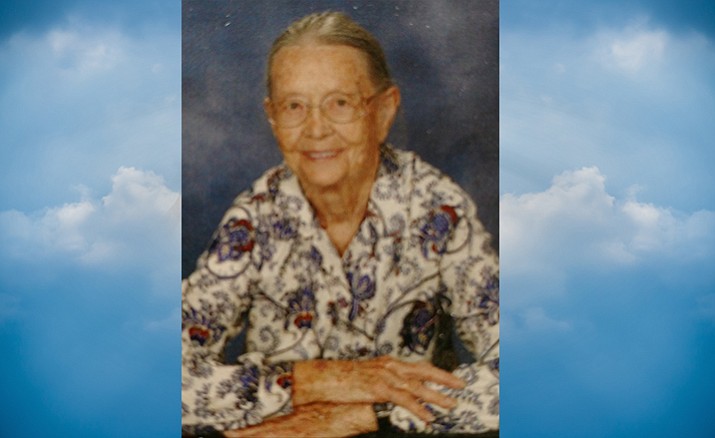 Mary Swain (Anderson) Huffaker was born August 16, 1921 to Alfred T. and Grace E. (Burnham) Anderson on a farm near Junction City, Oregon, and died December 31, 2017 in Yukon, Oklahoma. She moved to Arizona in 1933 and was a graduate of Prescott High School, Woodbury College, and was a WWII WAVES veteran. She left service with a rating of SKD1.

She married William L. Huffaker January 11, 1946, and they farmed in Cornville, Arizona for many years, mostly as Poultry farmers – first fryers, then eggs. She moved to Cottonwood, AZ. in 1997.

She was preceded in death by her husband William, her daughter Janice, and granddaughter Naomi and is survived by her sons John (Susan) of Cottonwood, AZ, Charles (Cindy) of Apache Junction, AZ, and Marvin (Leslie) of San Simone, AZ, and daughters Alice (Ralph) Boroughs of Valencia, Ca. and Joyce, (John) Roper of Yukon, OK., 16 grandchildren, 28 great grandchildren, and one great-great grandchild, and her brother Fred Anderson of Cornville, AZ..

She was a member of Verde Baptist Church (now Verde Community Church), The Gideon’s Auxiliary, the DAR, and Women in military service.

The funeral is scheduled for 10AM Monday the 8th of January at Verde Community Church (formerly Verde Baptist Church) located at 102 S. Willard Street Cottonwood, Arizona