5 things to watch in sports this week Jan. 7 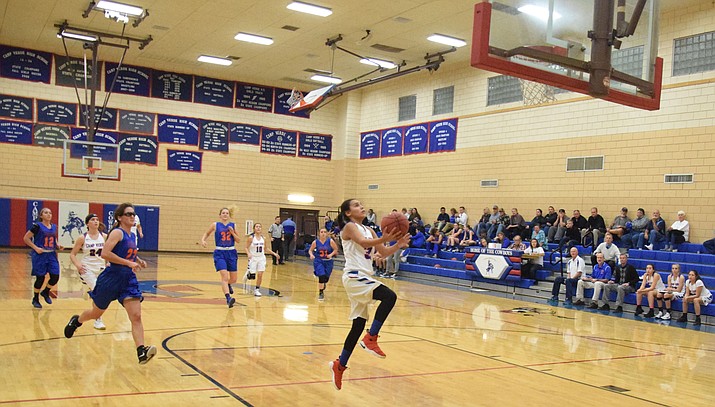 Camp Verde sophomore Amanda Lozanilla lays the ball up against Chino Valley. The No. 6 Cowboys play at No. 3 Sedona Red Rock on Tuesday at 5:30 p.m. (VVN/James Kelley)

In the morning game on Sunday, the Jacksonville Jaguars host the Buffalo Bills at 11:05 a.m. on CBS. The Bills’ last playoff appearance was 1999.

This is the Jaguars’ first playoff appearance since 2007 and first home playoff game since 1999.

Then at 2:40 p.m. the Carolina Panthers face the New Orleans Saints in a divisional rematch. Those are always fun and eventful.

After their long winter break layoff, Mingus Union girls soccer returns to action and it’s against a talented rival.

The Marauders host No. 4 Prescott at 5 p.m. on Monday. It will be the Marauders’ first game since they beat Lee Williams 4-2 on the road on Dec. 18.

With a ranking of 27th, Mingus Union may need a strong showing against the Badgers if they want to make the state tournament again.

Georgia faces Alabama for the title

Familiar foes face off in the 2018 national championship game as Georgia and Alabama play in Atlanta.

UGA head coach Kirby Smart was an assistant under UA head coach Nick Saban at LSU, the Miami Dolphins and then Alabama.

Plus of course both teams are from the Southeastern Conference. So if you can stomach ESPN’s undying love for the SEC, the game will be at 6 p.m. and they will have 20 different broadcasts on ESPN, ESPN2, ESPNU, ESPNEWS, ESPN Classic, ESPN Goal Line, SEC Network, ESPN Deportes, and ESPN3.

More than just bragging rights will be on the line on Tuesday at Sedona Red Rock.

The Sedona Red Rock girls are ranked No. 3 and the Camp Verde girls are No. 6. On the boys side, the Scorpions are No. 14 and the Cowboys 34th.

Since 2004, the Camp Verde girls own a 16-7 record against their rivals. On the boys side, the Scorpions have a 14-10 advantage over their rival.

If you need your NAZ Suns fix while they’re on their long road trip, you’re in luck.

The Suns’ game on Friday at 10 a.m. against the Canton Charge will be on ESPNU. The game is at the Hershey Centre in Mississauga, Ontario, Canada and is part of the NBA G League Showcase.

The Charge are the Cleveland Cavaliers’ affiliate.