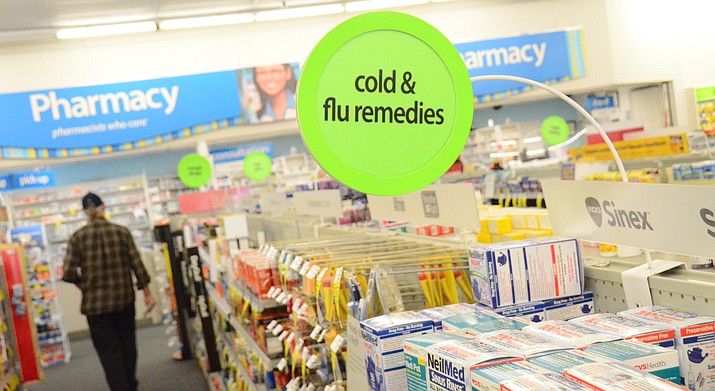 There’s plenty of remedies for the flu on the shelves at CVS in Cottonwood, but the pharmacy is out of Tamiflu, a popular antiviral medicine for treatment of flu which must be prescribed by a doctor, according to CVS Pharmacist Dan Tutelman on Friday. The local pharmacist said he has called pharmacies all over Northern Arizona looking for Tamiflu, but everyone seems to have run out early because of the unusual flu season. CVS Pharmacy is giving flu shots everyday now and he said it’s not too late for this season. The season extends into February and March. It’s more dangerous for children under two and seniors over 65 years of age, he pointed out, because of a less of an immune response. It takes two weeks for a flu shot to take effect, the pharmacist added. VVN/Vyto Starinskas

Influenza activity is at record levels in Arizona and there are several hospitals statewide experiencing long emergency room wait times due to the increased number of sick Arizonans.

Dr. Richard Ruhling, a retired physician whose 40-year practice of medicine was not inhibited by his getting the flu, with one exception.

Ruhling also has a Masters Degree in Public Health and understands epidemiology. Most flu occurs when people’s immunity is low from the holidays’ high sugar intake because it reduces the phagocytic index of the white blood cells. The while cells prefer sugar and get lazy, so they won’t eat the germs.

Rather than cake and ice cream, we should be eating oranges and grapefruits that have Vitamin C, and recent evidence suggests Vitamin D is also more important than flu shots.

Working in Emergency Room one evening, I noted the onset of a scratchy throat, general achiness and feeling of a chill with a runny nose. My temperature was normal.

Recalling microbiology class, and how viruses may be arrested or killed better with fever, I took a break and filled a tub with water as hot as he could stand.

Immersing myself for 20 minutes and got my temperature up to 102.5 when I sat up, and as the water was draining from the tub, I poured cold water over myself because I was taught that a contrast of hot and cold can double the white blood count—twice as many soldier cells to fight the germs.

I ate no supper. I would have taken some Vitamin C if I had it, but I felt well enough to finish seeing ER patients and at 11 PM, thought the bath had helped, so I took another one. In the morning, I had no symptoms; the flu was aborted.

In retrospect, I remembered that a Phys. Ed. Teacher told me in high school to end hot showers with cold to stimulate immunity.

A leading health website lists many articles questioning the efficacy of flu shots. An overview of a “Flu Shot” search on Mercola.com might daunt anyone’s wish for a flu shot. Dr. Joseph Mercola is a physician who understands the dangers of medical care. Here’s a sample…

Vitamin D deficiency may actually be a major cause of influenza. If one is severely vitamin D deficient, vitamin D supplements may be 10 times more effective than flu vaccine. Vitamin D is the sunshine vitamin but maybe by mid-winter, Vitamin D storage in the body is depleted. Congress yields to pharmaceutical pressure to restrict vitamins while their drugs are a leading cause of illness and death due to adverse reacations. JAMA, 4-15-1998; Archives of Internal Medicine, Sep 10, 2007, p 1752.

The Center for Disease Control and Prevention (CDC) revealed between 2005 and 2015, The influenza vaccine was less than 50% effective more than half of the time; During the 2015/2016 flu season, FluMist, the live virus nasal spray, had a failure rate of 97%.

Skip the goodies. Thanking God for oranges is not just for Thanksgiving–Dr. Selye, father of the modern stress theory said gratitude is the most healing of all emotions. Take a sun bath—you’ll have far less risk this flu season!

Dr. Richard Ruhling is an author and speaker with more information at http://RichardRuhling.com

Dr. Ruhling will give a free program for the Verde Valley Senior Center, 500 E Cherry St., January 17, and will have a half hour at 12:45 p.m. for any local residents that want to come.

After consulting with healthcare and public health partners, the Arizona Department of Health Services is advising ill people to only seek emergency medical care if they are at high risk for serious complications or are experiencing severe symptoms.

“Influenza is a very serious illness, so if you’re at high risk or have symptoms such as difficulty breathing, chest pain, dizziness, confusion, persistent vomiting, cannot drink fluids, or have flu like symptoms that improve but then return with fever or worse cough, seek emergency medical care immediately,” said Dr. Cara Christ, director of the Arizona Department of Health Services.

People at high risk of serious complications from influenza are:

• People with immunosuppression, including that caused by medications or by HIV infection

• Women who are pregnant or postpartum (within 2 weeks after delivery)

• Residents of nursing homes and other chronic-care facilities

“If you have symptoms and are in a high risk group, or if you feel very sick or worried about your illness, talk to your medical provider,” Dr. Christ said. “Most people with mild flu symptoms will get better without seeing the doctor and should stay home to prevent spreading it to others. It’s important to drink plenty of fluids and get plenty of rest when you have the flu. You can also treat symptoms with over the counter medications.”

Getting vaccinated against influenza is the most effective way to protect yourself from the disease. It can take up to two weeks to build full immunity to influenza after you are vaccinated, so everyone needs to get the flu shot immediately. People can find a place to get vaccinated at vaccinefinder.org. Even if you are vaccinated, you can help prevent influenza from spreading by washing your hands frequently, covering your nose and mouth when coughing and sneezing, avoiding touching your face, and staying home when you are sick.

“Someone with influenza can spread the disease when they cough, sneeze, or talk, which creates influenza droplets that can land in the mouth or nose of someone nearby,” Dr. Christ said. “You can also catch influenza by touching a surface or object that the virus lands on and then touching your mouth, nose, or other parts of your face. If you have the flu or flu-like symptoms, stay home. And if your kids have the flu or flu-like symptoms, keep them home from school.”

There have been 7,978 cases of influenza reported this season, with 2,453 reported the last week of December 2017. Compared to the same time period in 2016, there were 834 total cases and 282 cases reported in the last week of December 2016. This is the highest number of seasonal cases this early since influenza tests became reportable. During the past two seasons, Arizona did not reach widespread activity until February.