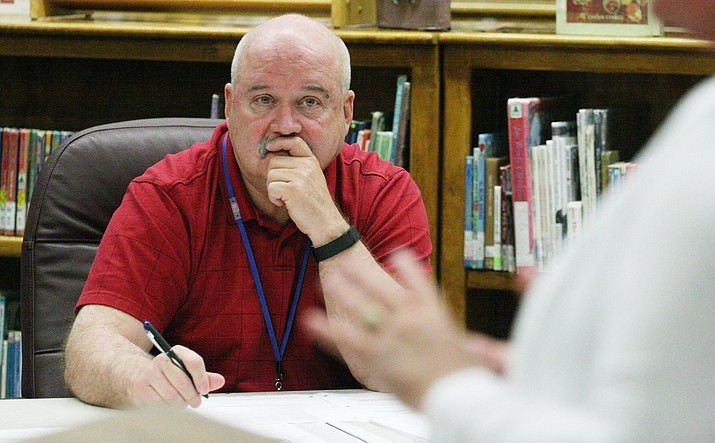 CAMP VERDE – When Camp Verde Schools Superintendent Dr. Dennis Goodwin told the board in December that he would no longer seek a renewal to his current contract, he didn’t necessarily say he wouldn’t entertain an entirely new pact.

Tuesday, the District’s governing board decided that regardless of what their superintendent meant, that their plan is now to find his replacement.

On a 3-to-1 vote, the board decided to solicit the services of Arizona School Boards Association (ASBA) to fill the position held by Dr. Goodwin since July 1, 2015.

Dr. Goodwin spent much of 2017 wondering when – or whether – the Camp Verde school board would be interested in negotiating a contract with him. Though the topic was discussed several times at CVUSD board meetings, a contract was never offered. 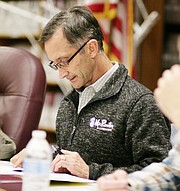 The Camp Verde Unified School District’s governing board chose Tim Roth to be the board’s president for 2018. (Photo by Bill Helm)

Before the CVUSD board’s vote Tuesday, board member Kitty McDowell said that she thought it “a little on the premature side” to move on from Dr. Goodwin “because we haven’t decided if we’re going to offer the superintendent a contract.”

“I didn’t understand [his Dec. 12 letter] to mean he wouldn’t accept a renewal,” she said.

But offering a contract to Dr. Goodwin had not been agendized for the Jan. 9 meeting, board member Helen Freeman responded.

“The sooner we begin [the search for Dr. Goodwin’s replacement], the better off we are as a district,” Freeman said.

Dr. Goodwin’s last day with the district is scheduled for June 30.

With two votes for Kitty McDowell and two votes for Helen Freeman, the board agreed to vote again in February to name a clerk for 2018.

Camp Verde school board could approve home assignment of Superintendent Dr. Goodwin for remainder of contract
District considers contract with Arizona School Boards Association for superintendent search
Three and done for Dr. Dennis Goodwin?
Danny Howe to be Camp Verde schools’ ‘administrator-in-charge’ through 2018-2019 school year
School board expected to choose calendar for 2017-18, and beyond
Event Calendar