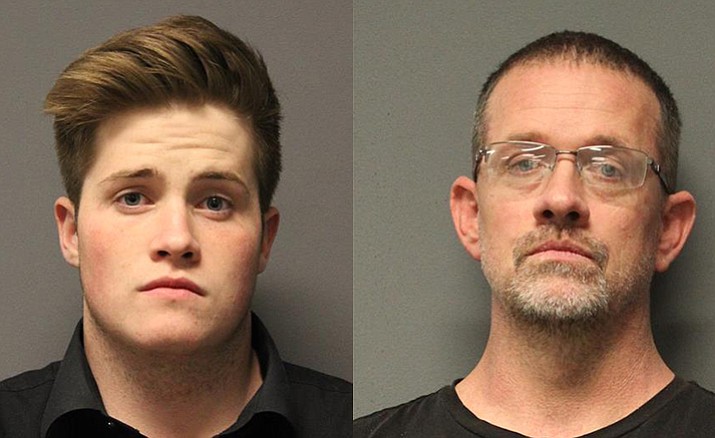 Swank pleaded guilty Nov. 6, 2017, to three counts of attempted sexual conduct with a minor and one count of child molestation. The incidents involved two victims throughout 2013.

Brandon Sean Swank, Christian’s father, was the first. He requested contact with his son be permitted.

“I want to maintain a relationship and keep building it. He is my son, I love him to death,” Brandon Swank said.

Brandon Swank was arrested in February 2017 as a result of a Yavapai County Sheriff’s Office investigation discovering he “became aware of the sexual abuse of a child by his son” and failed to report it.

He was arrested on a charge of failure to report child abuse, a misdemeanor. He pleaded guilty to the charge Dec. 21, 2017 at Verde Valley Justice Court and was ordered to pay a $500 fine.

The mothers of the two victims also gave statements.

The defense called upon family members to provide statements to the court, including Christian Swank’s mother, his younger brother and his fiancée.

State prosecutor Ethan Wolfinger has been assigned to the case since its beginning in February 2017.

“The defendant has a lot of love and support. I personally believe from a rehabilitation standpoint in the criminal justice system, people who have love and support from their family are much more likely to not repeat their behavior,” Wolfinger said.

Wolfinger noted that the plea deal involved a lot of victim input and Swank’s age at the time, 15, played a factor.

“I enjoy hearing the good things about the defendant. But as a prosecutor I sit at this table and I always ask the question, ‘why would somebody hurt a child sexually?’ In this case, two children on multiple occasions.”

He continued: “When this case came to my office for prosecution, there was a history of scuttlebutt involving Christian Swank in activity, in high school, that was sexual in nature and harmful. Not necessarily him, but people he was with,” Wolfinger said.

The State requested not less than seven years of probation.

“I’m here to say I support the plea agreement,” Wolfinger said, “The words expressed about Christian today only go so far. For him, his actions here on out will demonstrate whether he’s the man his family have portrayed him as today, or whether he’s the person that will continue to make poor, immature decisions.”

Swank’s privately retained attorney, Ryan Stevens, pointed out Swank’s perfect attendance to court dates. He also noted Swank passed both a polygraph test and a psychosexual evaluation. “I’m proud of Mr. Swank for his honesty in the report,” Stevens said. “We have actual examples of him not turning in the wrong direction.”

Stevens also stated Swank “has matured greatly” since he committed his crimes.

Bluff then gave Swank the opportunity to speak.

“My actions were wrong. I understand there were two victims and I’m sorry,” Swank said. “I want to right my wrongs and fix anything I possibly can. I was young and wasn’t thinking about how my actions would affect those two girls … I really cannot believe I did those things.”

Judge Michael R. Bluff thanked the family for being in court and their comments, saying it was “refreshing” to see.

“The stupid things we do when we’re underage, right?” Bluff said, before immediately moving to Swank’s sentence.

Bluff ordered Swank to serve six months of jail (with credit for 50 days) and five years on probation. He granted Swank to the ability to seek work release. Bluff also said contact with victims and his father would be up to probation.

Before Swank left the courtroom, Bluff once again asked for Swank’s attention. The judge emphasized that staying on the right side of probation was key.

“Don’t paint me into a corner, OK?” Bluff said.