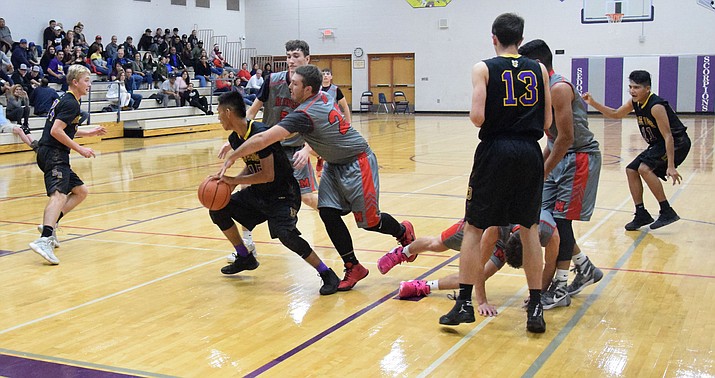 Mingus Union boys basketball came back from the winter break to get a couple road wins and one was their first win over Flagstaff since 2009.

“It was good, our program hadn’t beaten them since 2009 or something like that, so obviously it’s good to get off of that schneid,” said Mingus head coach Dave Beery. “It was a pretty even game in the first half and then in the third quarter we made a big run and got them to turn it over a few times and we were able to get some easy transition baskets that really kinda brought our energy up and brought theirs down and allowed us to kinda dictate how the rest of the game went.”

After taking a one-point lead in the locker rooms at the half, the Marauders built up the lead to 20 in the third quarter.

Despite concerns about coming out poorly after the winter break, the Marauders shined at Flagstaff.

“We were pretty worried about that, concerned about that, so we really talked about that because we saw the freshmen and JV play and neither one of them stepped on the court and both teams were pretty flat in the first quarter, so we wanted to make sure that we were mentally ready when we stepped on the court, so it was definitely a point of emphasis,” Beery said. “We had a very good start against Flagstaff. I think the second a quarter a little bit of the elevation, a little bit of being out of shape from break caught up with us, we looked pretty poor at the end of the second quarter but they were able to respond and come out with a lot of energy in the third.”

Then on Tuesday night Mingus Union beat No. 23 Lee Williams 54-41 on the road.

“It was an ugly game, it was 6-5 after the first quarter, I think we were ahead, and that’s obviously not the pace that we want to play,” Beery said. “I don’t think it was necessarily pace, I just don’t think either team could put the ball in the bucket, so it was really sloppy, not a lot of turnovers, just a lot of missed shots for both teams.”

Rather than building up their lead with big runs, the Marauders gradually built up the margin.

“We talked about it after the game, we talked about it at halftime, ‘good teams win ugly games’ and that was definitely and ugly game,” Beery said. “We didn’t shoot well at all, we had guys in foul trouble, we didn’t execute. They’re a team that we know makes you play that way. They play really hard, they’re very fundamental, they’re very hard working, blue color kind of team, so they made us play their style and we had to make sure that we did little things right to beat a team like that. So yeah, it’s good to get a 13 point win, especially on that long road trip, it’s always a tough one to play.”

The Marauders are tied for first with Prescott with a 4-1 region record, but the Badgers beat the Marauders 75-69 at home and so they have the tie-breaker. Coconino with a 3-1 Grand Canyon record is third and Flagstaff is fourth at 5-2, but Lee Williams is 2-2, Mohave 1-6 and Bradshaw Mountain 0-6.

Although the region isn’t as balanced as Beery thought it would be, he said they need to be ready every game, especially after the Thunderbirds almost upset the Badgers.

“To be honest it’s been a little more lopsided, there’s some teams at the top and some teams at the bottom, I kinda thought there would be a little more equity and some of that’s injuries and some played well and some haven’t,” Beery said. “There’s still a lot of region games left, you look at Prescott, they’re in first place, who beat Mohave, who is in second to last, by one point (Tuesday) night so I thought every game would be a dog fight, I think every team in our region can be competitive with each other so we have to come ready to play every night basically.”