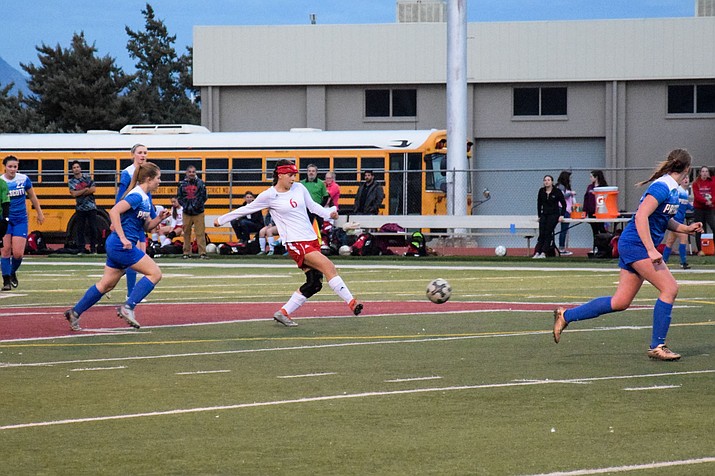 Mingus sophomore Felicia Bueno passes the ball during the Marauders’ 4-0 loss to No. Prescott on Monday at home. Mingus head coach Joe Rongo thought the Marauders did well in their return to action following the winter break. (VVN/Halie Chavez)

“Prescott being the No. 2 ranked team, I thought we did well (laughs),” Rongo said. “They scored three in the first half, two of them were just clear mistakes on our part. They ended up scoring a fourth in the second half. I thought we played really well in the middle of the field, which has been some of our weakest spots and so we ran with them in the middle well, we just weren’t finishing.”

With the loss, Mingus Union (5-6-2, 1-2 Grand Canyon) dropped to 30th in the rankings. However, they have a chance to move into the 16-team playoffs as their final four games are all against top 12 teams.

“I think our youth is coming to bite us at this point, we’re a young team and I’m looking forward to what the future brings,” Rongo said. “We’re on the bubble, if we can pick up two wins in the next two weeks, we’ll probably get a play in game for State and that’s where the team was last year, they got a play in game, it means you go up against a strong team right up, so it’s hard to advance beyond that but getting that experience would be good for the girls, just to feel that pressure.”

The break, their last game was on Dec. 18, was a positive one for the Marauders, who lost four games in row in December as injuries mounted.

After the Marauders started the season strong, making it to the championship game in the Desert Cup Classic, and then going on a losing streak, Rongo was afraid it would deflate the girls but that didn’t happen.

“They didn’t go there, so that was a positive, a little resilience is a good thing,” Rongo said.

He also said he’s changed their formations on the fly and Marauders adapted quick to it.

He said junior defender Kaitlyn Card has impressed since they have come back from the break.

“I’m really liking what I’m seeing from Kaitlyn Card in the defense,” Rongo said. “She’s a very physical player. She really seems to be stepping up in the knowledge of the game and anticipating stuff.”

Mingus Union hosts No. 10 Bradshaw Mountain on Tuesday at 5 p.m. in their next game. After that they host No. 12 Coconino and then travel to No. 2 Flagstaff.

Rongo said the schedule is “tough, tough” and that is says a lot about soccer in Northern Arizona.

“Coming back from this break we figured we’d have to play five teams in the top 10 and then two already making state, so of what we have left all the teams are already qualifying for state except us, so it’s a challenge uphill and it’s doable,” Rongo said. “I’m looking at Coconino and Bradshaw as possibly our softest games. Thunderbird is ranked four. Prescott as I said was two, Estrella Foothills we lost to, I think they’re one right now, Flagstaff is like three, so it just seems like it’s non stop coming at ya (laughs).”