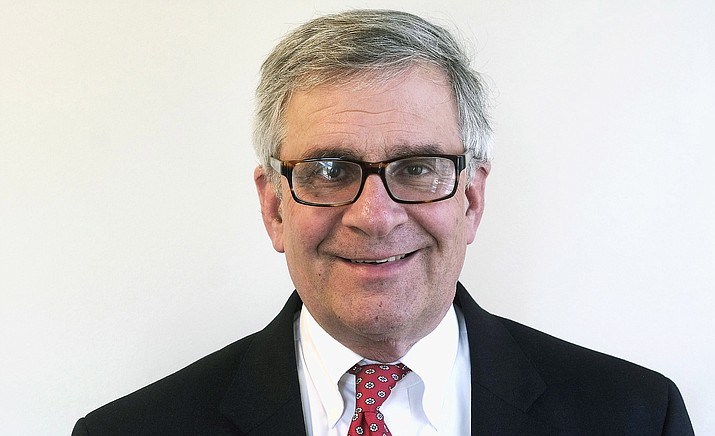 That’s a riff on one of the great campaign buttons of all time, distributed by the 1972 presidential campaign for Sen. Edmund S. Muskie, the Maine Democrat who looked like Lincoln but exploded like Vesuvius: President Muskie! (Don’t you feel better already?)

Muskie never did get the Democratic nomination, though eight years later Jimmy Carter did appoint him secretary of state, and he served credibly in a difficult time.

Muskie was a plausible nominee; by the time he ran for the White House, he had been a state representative for five years, governor of Maine for four, an appealing Democratic vice presidential candidate and U.S. senator for 13 years. He was known for his mastery of the federal budget and for his advocacy for environmental causes.

Today a resume like that would be almost a political death knell. He’d be described as a full-fledged member of the elite on the basis of his degree, Phi Beta Kappa with a double major in history and government from Bates College, and an Ivy League law degree (Cornell).

Plus, he’d be dismissed as a denizen of the Deep State on the basis of having served in government for more than a third of a century. The final insult: He was confirmed as the nation’s top diplomat by a 94-2 vote, clear evidence that he was an insider and that his judgment must be compromised if not actually contaminated.

All this is a measure of how times have changed. Since 1980, we have had a president who was an actor and one who was a real estate and casino tycoon. The actor had two terms as governor of a state with about the same population as Canada. Even so, in the 1985 film classic “Back to the Future,” one of the characters was astonished to learn that Ronald Reagan was president. He wondered whether Jerry Lewis was vice president.

Stranger things have happened. In fact, they just did. But the broader question -- broader than Reagan, broader than Donald J. Trump -- is how the country today regards political experience.

It used to be an asset, so much so that when Richard M. Nixon (Naval service in World War II, U.S. House, U.S. Senate, vice president) ran for the White House in 1960, he emphasized his experience, which he argued was deeper and broader than that of John F. Kennedy.

In a two-minute television advertisement -- itself inconceivable in the 21st century -- President Dwight D. Eisenhower described Nixon as “superbly experienced, maturely conditioned in the critical affairs of the world.”

Today President Trump, the first president with neither political nor military experience, more nearly resembles Steve Jobs and Mark Zuckerberg -- disrupters all -- than Gen. Eisenhower or Bill Clinton, and certainly more than William Howard Taft (governor of both the Philippines and Cuba, circuit court judge, secretary of war) or even Woodrow Wilson (who at least was governor of New Jersey).

Franklin Delano Roosevelt, against whom every modern president is measured, was a state senator, assistant secretary of the Navy and governor of New York, which was indisputably the most important state of its era.

And two of our least experienced presidents -- Barack Obama, a state senator and U.S. senator, and George W. Bush, a governor -- at least served in high-visibility political positions.

Now to Oprah Winfrey. No cultural history of modern America can plausibly omit Winfrey for her contribution to the national conversation, her role as an important black female and her service as a national arbiter of popular fiction.

Her speech at last Sunday’s Golden Globe Awards telecast was stirring, motivating and inspiring. She personifies good judgment and good values. She thinks the American press is an indispensable element of our culture, and that at least is a refreshing departure from the last four presidents, all of whom regarded us ink-stained wretches as vermin.

But should she be president, any more than Zuckerberg, who surely is toying with the notion as well? Winfrey moved swiftly to quash the notion. But its half-life -- a full day on cable television, which is that medium’s equivalent of an eon -- still raised important questions:

Should the country play down traditional qualifications, and diminish conventional experience? Is success in entertainment, social media or sports (excepting quarterback Jack F. Kemp, who served in the House, the Cabinet and as vice presidential nominee) enough to qualify someone for the White House?

Oops. That word “qualify” just slipped in there.

This gets to a broader issue in American life, which is the devaluation of expertise in just about every area of life, though it would be difficult to find a parent who sought after the least-qualified doctor, or the least-experienced surgeon, to treat a critically ill child. (Then again, there are people who believe they know better than the experts who advocate widespread vaccinations.)

Then again, the experts built the Suez Canal and the Panama Canal. They battled polio and cancer. They designed the atomic weapon that ended World War II.

They built a Redstone booster rocket that sent Alan Shepard into sub-orbital flight, an Atlas booster that sent John Glenn into orbit and a Saturn V that sent Apollo astronauts to the moon. They built the microwave oven and the smartphone. They brought kale into the American diet and Oprah Winfrey into America’s living rooms.

Overall, it is a good record, and overall experience has served us well. It taught Abraham Lincoln how to deal with recalcitrant generals, FDR how to deal with a depression and a world war, Gen. Eisenhower how to resolve difficult political challenges in wartime and postwar Europe and in the White House, and it taught Reagan how to read (the public mood) and lead (members of Congress).

President Winfrey: Don’t you feel better already? Better, maybe. But probably not good enough. Experience is no guarantee of success, but overall it has a sound record.