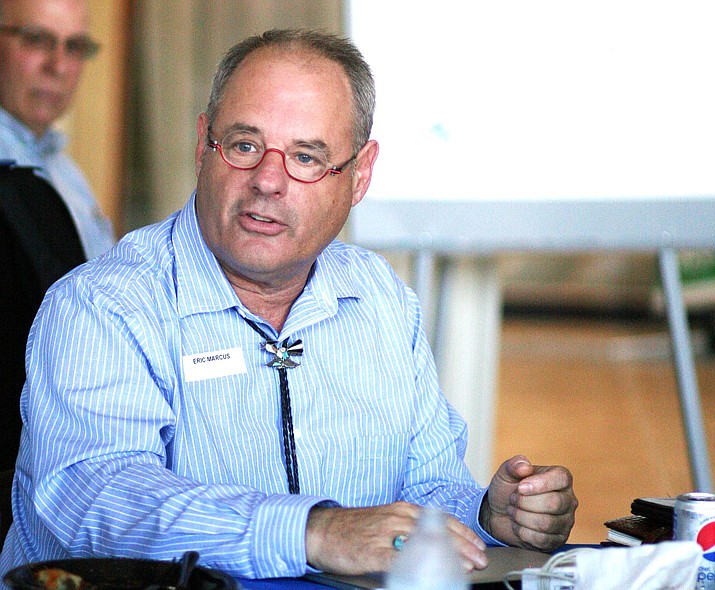 COTTONWOOD – Though most folks are accustomed to the right hand up, left hand on the Bible, and “repeat after me,” taking the oath of office for a school board is as simple as signing a document.

As of 6 p.m. Tuesday, the Cottonwood-Oak Creek School District’s governing board will officially greet its new member, as Cornville resident Eric Marcus is expected to sign the affidavit of appointment to the board.

“That’s what makes him a board member,” said Yavapai County School Superintendent Tim Carter. “By signing it, he’s officially taking the oath.”

Marcus will replace Linda Walker, who resigned from the C-OC school board in December. The appointment will be effective Jan. 16 and will expire on Dec. 31, 2018.

With a Bachelor of Arts in Mathematics at Occidental College in Los Angeles and a Juris Doctorate from Loyola Law School, Marcus practiced law in the private sector and taught at the University of Wisconsin, Parkside.

He has held positions with large technology-based companies in a variety of specific fields, as well as having served as councilman for the city of Racine, Wisconsin before his family moved to the Verde Valley in 2012.

He also participated in the Verde Valley Forum for Public Affairs in 2016.

Marcus has a “wealth of experience in a variety of areas,” Carter said of the district’s newest school board member. “His knowledge of the law and governance processes are significant. I believe he will represent the interests of the school district, student and parents, taxpayers, and community members extremely well.”

Carter said that he was “pleasantly surprised” with the qualifications not only of Marcus, but of the other four candidates for the Cottonwood-Oak Creek school board.

“It was great to see a pool with that many well-qualified people,” Carter said. “Hopefully many of these individuals will put their names into consideration for election during the November 2018 cycle, which begins in April.”

Carter individually interviewed the candidates, and then spoke with the other C-OC District Governing Board, as well as district and building administration.

Before making the appointment, Carter also considered the 29 public comments he received about the candidates.

Marcus: ‘We need to be raising our expectations and helping our children dream bigger dreams’

Reading his local newspaper is how Eric Marcus first learned that Cottonwood-Oak Creek School District was in need of a new board member.

So Marcus did his homework, so to speak, as he spoke with a few of his colleagues about this opportunity to be part of the district’s governing board.

“Everyone thought it was a good idea,” said Marcus, who on Monday was selected by Yavapai County School Superintendent Tim Carter to replace Linda Walker, who resigned from the C-OC school board in December 2017.

Though the Cornville resident accepts an appointment that will be in effect from Jan. 16 through Dec. 31, 2018, he says he looks forward to an opportunity to put kids in the best possible place to succeed.

“As I look at how Arizona is developing, 62 percent of jobs require some sort of post-secondary education,” Marcus said. “We need to be raising our expectations, and helping our children dream bigger dreams. We have to expect more, and I look forward to that challenge.”

For Marcus, the challenge began with a 90-minute interview with Carter on Jan. 10.

“I was impressed with the process,” Marcus said. “Carter has obviously developed a thorough, comprehensive approach to interviewing candidates.”

According to Carter, “there’s no doubt” that Marcus “will do just fine” on the Cottonwood-Oak Creek School Board.

“Education, finance, working with non-profits, he understands the scope of what governing boards do – and what they don’t do,” Carter said.

With plenty of hot topics at Cottonwood-Oak Creek, such as a possible consolidation with Mingus Union, and the possible merger of three of its schools into two K-8 programs, Marcus says his plan is to join the governing board “with an open mind.”

“I’ll be looking at all the facts,” said Marcus, with a professional background in law, as well with non-profit organizations. “I don’t want to rely solely on what I’ve learned [in the newspaper]. I really want to understand the facts as they will be available to me.”

On Tuesday, Feb. 6, Marcus will participate in his first meeting as a member of the Cottonwood-Oak Creek School District’s governing board.

“I look forward to working with Mr. Marcus,” said JoAnne Cook, Cottonwood-Oak Creek school board president. “I am thankful for his willingness to serve our students, district, and community.”