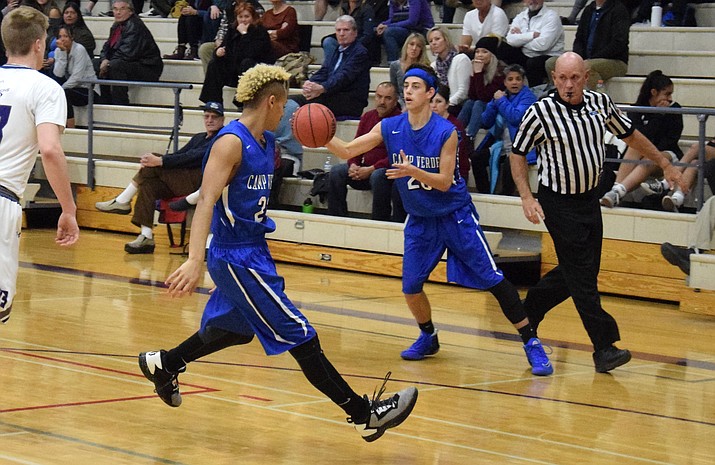 Camp Verde sophomore Jason Collier is leading the Cowboys in scoring (15.2 points per game) in his first season on varsity. (VVN/James Kelley)

Camp Verde High boys basketball sophomore Jason Collier has exploded onto the scene for the Cowboys.

Last year the shooting guard was on the JV and now he leads the Cowboys in scoring with 15.2 points per game.

“He got a fair amount of minutes on our JV team but he was just a scrawny little freshman kid, with an OK shot,” said CV head coach Daniel Wall. “The kid absolutely worked his tail off in the offseason. He’s worked harder than any kid I’ve seen in a long time, just on his own, on his shot, on attacking and it has shown. He’s progressed a long ways on the offensive end of the floor.”

Collier has been a pleasant surprise for the Cowboys, who have already surpassed last year’s win total.

His poise has impressed.

“That’s the biggest surprise about him: he hasn’t had any varsity experience before this year and you wouldn’t know it the way he carries himself on the floor,” Wall said. “He makes young player mistakes a lot and we’ve already talked about the next step, which will be the weight room, but the way he’s able to see plays develop already and make the correct read or find the correct guy or hit the shot or go off the dribble, he’s got quite a good arsenal of moves for a sophomore kid.”

With the various injuries the returning Cowboys suffered, Collier stepped up to fill that void.

“I think that was a really big piece of his growth as a player,” Wall said. “He was kinda thrust into a bigger role than what he or I had anticipated him doing and he just stepped up to the challenge and he hasn’t been afraid to take risks on the court and just have a lot of confidence and that’s been a really big asset for him.”

Wall said he is hilarious, works hard in the class room and his teammates like him.

Collier: For me individually or for the team?

Collier: For the team I wish it’s gone a little better, we’re doing well. For me I think I’m doing alright. I have higher expectations than what I’m doing right now, I wish I could be doing better.

VVN: What kind of goals did you have going into the season, personally?

Collier: To start on the team, that was just my main goal: to start. And also help the team win as much as possible.

VVN: What’s it been like for you this year, starting and playing well?

Collier: It’s been nice but all glory to God first off. I just worked hard to get where I’m at.

VVN: As a team you guys had some injuries obviously but you guys were able to kinda push through and have some success and even now when you’re kinda reintroducing them into the line up, you’ve had success, how were you guys able to do that?

Collier: Yeah our team is tough, so we’re going to go out and battle every night and try and find a way to win. It’s 32 minutes of effort and that’s what we try and put on the floor every night. If we do that then we have a good chance of winning the game.

VVN: How big was it to get that win (Tuesday)?

Collier: We needed that win, it was a big win and we expected that win because that’s a game that we needed to win and we can win, so it was a good win.

VVN: How long have you been playing basketball?

Collier: I started in the backyard just shooting around in like second, third grade but Grasshopper was about fourth grade.

VVN: So how did you get into it?

Collier: My sister and her friends, they were really into it and I just kinda wanted to fit in and I just fell in love with it.

VVN: Have you always been the same position or have you changed at all as you have grown?

VVN: Do you have a favorite pro basketball team?

Collier: Because back in the old days I liked Russell Westbrook and Kevin Durant and James Harden and then they split up and I just like Russell Westbrook now because he’s the only one left. They’ve just been my main team since like 2011.

VVN: How would you describe your play for someone who hasn’t seen you, what’s your game like?

Collier: I think I’m a shooter, yeah I’m a shooter and person that score the ball, but I’m not trying to hog the ball, I’m trying to find my teammates as much as possible, just whatever I need to do to get the win.

VVN: What kinds of things do you like off the court? What hobbies do you have?

Collier: It’s going alright, I wish I could get a little bit better grades but I’m getting C’s and B’s, a couple A’s.

VVN: Finally, do you know what you want to do after high school yet?