Are 2 principals better than 1?
Cottonwood-Oak Creek moves forward to convert 3 schools into 2 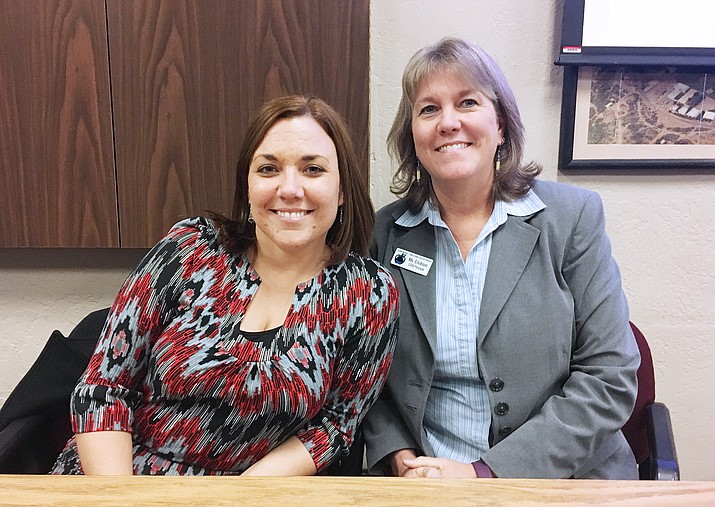 What does it take to make a successful co-principal team?

When did you first discuss the co-principalship model?

Nancy Erickson, principal, Dr. Daniel Bright School: “The administration team began discussing the administration structure if we were, as a district, directed to go to a K-8 program. Through this the idea of keeping the current administrators in the three schools as we structure the two new schools.

“As we will be serving the same number of children we will certainly need the same amount of support structure.”

Jessica Vocca, principal, Cottonwood Elementary School: “There have been many discussions about who would lead our new schools. There were discussions and questions about administration since the beginning. Mr. King was more focused on building a solid team instead of just throwing people together. There needs to be a lot of planning and discussion when building teams.”

How would you split duties?

Erickson: “Now that Mr. King has decided that if we move to K-8 schools that Jessica and I would be co-principals at one school, we will begin to discuss how we might spilt the duties of the principal.

“At this point we have just begun the conversation as to the direction we would like to take our new school. An administration team would provide more student support.”

Vocca: “The reason to take a team approach is to provide more supports to students. Nancy and I have had some discussion about the new school and structures, but have just begun the thinking and discussing what this may look like.

“A good way is to start with our strengths and how we would use those to support the new K-8. As similar as our philosophies are with servicing kids, we have varied experiences in education.”

Erickson: “Regardless of our titles or duties, I am extremely excited to be paired with Jessica Vocca as an administration team. I feel as though we have similar visions of where we would like to take our new school.

“We have already begun to discuss multiple ideas on both structure and vision. Jessica and I will work diligently to provide the best school for our students, families and staff. A collaborative approach will certainly help in the developing process. We are up for the task of creating the best school possible.”

Vocca: “I have and will always be a team player. The key is keeping the vision of the school and district in mind.

“I am very interested and excited about building a new school system. The possibilities are endless. This is a very unique opportunity for Nancy and I, as well as our district, but we are up for the work it will involve.

“A team and collaborative approach is always best; the process involved with brainstorming and planning needs to be open and messy before it becomes focused. Once a vision is in place, and staff is set, that is when the fun begins.”

In Dr. Daniel Bright’s Nancy Erickson, Cottonwood Elementary’s Jessica Vocca and Cottonwood Middle’s Matt Schumacher, each of those schools has a principal with “long-term and exceptional service” to the district, King says.

Come February, King says he looks forward to presenting a plan to the Cottonwood-Oak Creek school board. Though much is still being debated within the district’s administrative team, the superintendent says that one thing is certain.

None of the three principals affected would lose their jobs – and none of them would be demoted.

But two of them, Erickson and Vocca, would share the principalship at one of the two new schools.

“Both have their own unique, strong talents they bring to the table,” King says. “With those two working in concert, we are confident we can make that model work id we move forward.”

Still, are two principals better than one?

Though Cottonwood-Oak Creek would not be the first school district to employ a co-principalship at one of its schools, the model is far from common.

Until 2012, Mansfield Public Schools in Massachusetts employed co-principals for the better part of the 21st century. Says District Superintendent Teresa Murphy, the model had “some successes, [and] a lot of challenges.”

Before she became the district’s superintendent in 2017, Murphy worked within the co-principal model for one year as an administrative intern, for three years as an assistant principal, and for six years as co-principal.

Though she was not superintendent when the district moved away from the co-principalship model, Murphy says the decision to move back to a more traditional school leadership model was “in part” hers.

“Not a lot has been written about it,” Murphy says. “I found my first years that it worked very well for a new principal. It’s very nice to have someone to run ideas by. But it can be restrictive.”

The restriction that Murphy most strongly pointed to was that for some teachers or administrators, “if they didn’t get an answer they like, they could go to someone else.”

Though Murphy says she hasn’t second-guessed her district’s move back to a more traditional leadership model, a co-principalship can work.

“It’s all about match-making. When it’s a good match, it can be a solid model,” Murphy says. “Very often, you have to put egos aside. Communication is key. You have to have a united front. You can disagree behind closed doors.”

“Regardless of our titles or duties, I am extremely excited to be paired with Jessica Vocca as an administration team,” says Erickson, who has served as principal at Dr. Daniel Bright since 2011. “I feel as though we have similar visions of where we would like to take our new school.”

With neither principal – nor the district for that matter – having been part of a co-principalship, Vocca admits that King’s plan is a “very unique opportunity for Nancy and I, as well as our district.”

“It is all in the details and planning,” says Vocca, currently in her second year as principal at Cottonwood Elementary. “It is going to take a lot of time and work to build a school essentially from the ground up. The confusion will lie in the clarity we provide. I assume this will be an interesting task, but we are up for it.”

What’s in a title?

Though co-principal is the term that will be used, Vocca says that there “hasn’t been much discussion” about this topic.

To Vocca, the title of co-principal “reflects our ability to work together as a team for the greater purpose of our school.”

“This is more about strengthening supports to our school and community,” Vocca says. “We need to be less concerned with our titles than with the work we need to accomplish together.”

A member of the district’s Parent Advisory Committee, Jak Teel says he has been “very fortunate to have had my child come up through this school district where he has been under the directional leadership and supervision of both Ms. Erickson and Mrs. Vocca.”

“In all of my dealings with these two, I have never seen anything that would suggest they couldn’t make this model work,” Teel says. “It’s certainly a unique model that has its challenges. At the end of the day though, if we can put each person in a position to be successful, I am all for it.”

Though it’s not yet agendized, King says that his “tentative plan” is to bring a recommendation to the Cottonwood-Oak Creek school board on Feb. 6 regarding the possible merger of the three schools into two K-8 schools.

“It’s about creating family-friendly schools,” King says. “Transitions can be tough. We want to limit the transitions; we want to give children a chance to be at the same place for as many as nine years.”

3 principals, 2 schools for Cottonwood-Oak Creek
C-OC school board to consider two administrative leadership models
Two principals not better than one, says C-OC school board
Editorial: By taking a step down, Nancy Erickson has never stood taller
King gets overwhelming support from teachers on co-principal plan