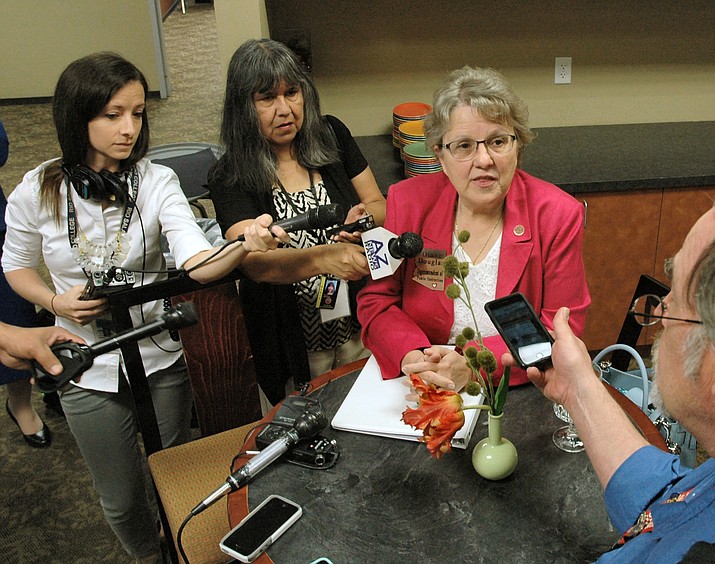 In her annual State of Education speech Monday, State schools chief Diane Douglas told members of the House Education Committee, “While teacher pay is not the only factor leading to the shortage, it is a big factor...Arizona teacher pay is among the lowest in the country.” (File photo by Howard Fischer/Capital Media Services)

PHOENIX — State schools chief Diane Douglas is renewing her call for a tax hike to provide a meaningful pay raise for teachers even as fellow Republican Gov. Doug Ducey insists it’s not necessary.

In her annual State of Education speech Monday, Douglas cited statistics showing that more than one out of every five teaching vacancies at the beginning of this school year still remained unfilled four months later.

“While teacher pay is not the only factor leading to the shortage, it is a big factor,’’ she told members of the House Education Committee.

“Arizona teacher pay is among the lowest in the country,’’ Douglas continued, with the salaries for elementary school teachers here “dead last.’’ High school teachers fare little better, with pay ranked at No. 48.

For Douglas, her solution is not only extend the current 0.6 cent voter-approved sales tax now dedicated for education — set to expire in 2021 — but boost it to a full penny. Of the $400 million that would raise, she said using three-fourths of that directly for salaries would boost average teacher pay by 11 percent; the balance would go to funding unmet needs in school capital expenditures.

The school superintendent acknowledged there are other more aggressive plans being discussed, including one by some business leaders who hope to boost the levy to 1.6 cents.

“I am willing to listen and work with anyone,’’ she said, including lawmakers and Ducey. And Douglas said she’s not a big fan of sales taxes.

But Douglas said that’s the simplest and quickest way to get the kind of dollars needed. And she left no doubt that she wants an increase — and wants it voted on quickly.

Ducey and some legislative leaders have said they are willing to consider a simple extension of the 0.6-cent levy. But they want the vote put off until 2020 under the premise that having it in a presidential election year would mean higher turnout and a greater chance of success.

It also would be a year when Ducey himself — as well as Douglas and other statewide officials — are not up for reelection. But Douglas said she fears “waiting to the last minute to act, giving ourselves no time to address the fiscal cliff if a solution is not passed’’ in 2020.

Douglas also took a shot at various efforts by lawmakers to provide alternate ways for people to be allowed in front of a classroom. These range from emergency teacher certifications by districts with severe shortages to allowing those with specific subject matter expertise to take over classes.

“While I appreciate the efforts and intent to minimize our teacher shortage, we must not lower the standards of the profession,’’ said Douglas, a former member of the Peoria Unified School District governing board.

“Our children deserve teachers that are not only fully prepared to manage a classroom, but are also experts in their respective content areas,’’ she said.

Douglas did find some common ground with the governor, agreeing to back his budget plan to restore the “district additional assistance’’ fund over the next five years to what it is supposed to be.

That fund provides state dollars to schools for things like books, computers and even school buses.

Lawmakers and the governor have not fully funded it for years, citing the state’s budget situation. In fact, Ducey slashed it again in last year’s budget by $117 million.

Now the governor said there is enough money to add back $100 million, with a promise to bring it back to $371 million by the fifth year.

“It is a path forward, with currently available resources, to end the recession-era cuts to school facility funding,’’ Douglas said. And she said it provides “flexibility’’ to schools, allowing them to use the dollars for whatever they want, whether it is teacher salaries or actual “bricks and mortar’’ construction needs, another account where funding remains far below where it was a decade ago.

Douglas took the opportunity to make a push for funding to update what she called the “archaic’’ computer system her agency uses to distribute $6.5 billion in state and federal funds to school districts. She said this is important not only to ensure that schools get the funds they need but also that none of the money -- and private student data -- winds up “into the wrong person’s hands.’’

She compared the problem to what would be the situation at Amazon, which has a web site and warehouse, being saddled to a delivery system using a horse and buggy.

“While I love and appreciate the history and romance of the Pony Express as much as anyone, it is not a 21st century deliver system,’’ Douglas said.