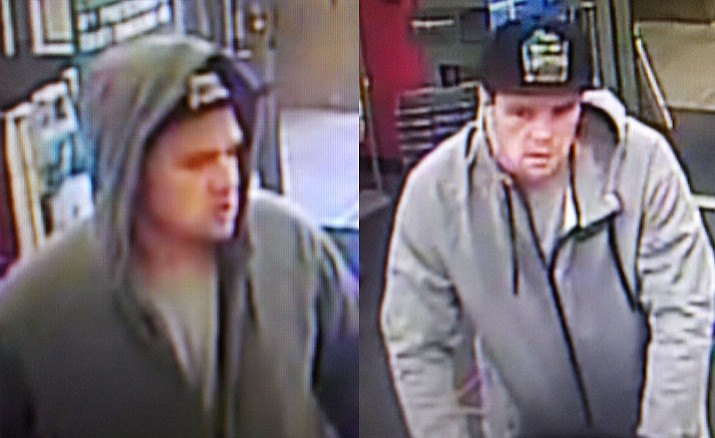 The suspect wanted for credit card fraud is described as a white or Hispanic male between the age of 20 to 35. He is believed to weigh 125 to165 pounds, is 5 foot 7 inches to 6 feet in height, with brownish colored hair and what appears to be facial hair along his jaw line. (Photo courtesy of YCSO)

CORNVILLE – Police are searching for a suspect who allegedly stole a credit card from a Cornville mailbox and racked up more than $30,000 in purchases.

Between Nov. 20 and 22, 2017, a credit card was stolen from a mailbox in located in the 1500 block of South Koch Ranch Road, said Yavapai County Sheriff’s Office spokesperson Dwight D’Evelyn.

The legal card holder/victim was not aware of the theft or illegal use of his card until a payment was requested by the credit card company earlier this month. At that time, the victim told credit card personnel that he never received the card and subsequently filed a fraud notice with the credit company, according to a YCSO news release.

During several weeks between Nov. 22, 2017, and the later part of December 2017, the suspect made purchases throughout the Verde Valley and Prescott area totaling in excess of $30,000 as a result of more than 150 transactions. Some of the fraud transactions were conducted in Cottonwood area businesses including Walgreen’s, Fry’s Market, Walmart, and JCPenney.

Deputies initiated an investigation and were able to obtain photos from video surveillance of the suspect directly identified as the purchaser of property using the victim’s stolen card.

The suspect is described as a white or Hispanic male between the age of 20-35. He is believed to weigh 125 to165 pounds, is 5 foot 7 inches to 6 feet in height, with brownish colored hair and what appears to be facial hair along his jaw line, according to YCSO.

The suspect is seen in several surveillance videos wearing a dark colored hat with a light colored emblem embroidered on the hat. The suspect is also seen pushing a young child in a stroller, possibly 2 to 6 years of age.