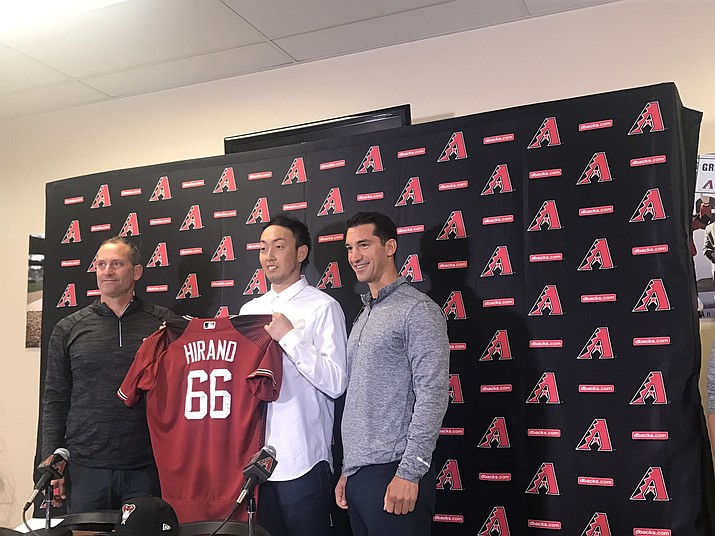 PHOENIX — What Yoshihisa Hirano has accomplished out of the bullpen for the Arizona Diamondbacks this season — piling up scoreless appearances to the tune of a franchise-record 25 straight games — is a truly unique feat.

Prior to 2018, the 34-year-old from Japan had never thrown a pitch in a Major League Baseball game. He pitched competitively in Japan’s Nippon Professional Baseball league for 12 seasons but would need to adjust to a different baseball and mound as he made the leap to pro baseball in the United States.

“I feel like there would be a little bit of a learning curve with a new ball, a different-sized ball, different mound, different construction of the mound, but he plowed right through that,” manager Torey Lovullo said. “I think he got over that in spring training.”

Hirano was able to overcome those obstacles quickly and has thrived by shutting down opponents out of the bullpen all season.

“He may be a rookie over here, but the guy’s been pitching for a long time,” said teammate and fellow relief pitcher Archie Bradley. “He’s been one of the sneakiest, best free-agent signings maybe of the offseason.”

The Diamondbacks franchise record Hirano now claims was previously held and shared by J.J. Putz and Brandon Lyon at 24 games apiece without surrendering a run out of the bullpen.

Putz, now special assistant to president and CEO Derrick Hall within the Diamondbacks organization, said that he wasn’t aware of his own streak until after it ended. He also joked that he’s glad a fellow split-fingered fastball thrower overtook his spot in Diamondbacks lore.

“(Hirano’s) overall delivery is deceptive just in itself,” Putz said. “The fact that he’s been able to locate his fastball, get ahead with that and put hitters in a defensive mode, and then obviously he’s got that devastating split-finger.”

An impressive aspect of Hirano’s streak is that he’s preventing runs from scoring with a two-pitch repertoire. The deceptive combination of his fastball and split keeps hitters off balance, as they can’t decipher which of the two pitches is coming toward the plate until it’s too late.

“I think it’s just the combination of having that split-finger, which is such an incredible pitch, it’s a huge weapon,” reliever T.J. McFarland said.

Opposing batters are hitting a paltry .167 against Hirano’s splitter this season and have struck out 18 times against it, according to FanGraphs data.

Hirano’s streak of 25 consecutive scoreless relief appearances is not only the best mark in franchise history, but it’s also the best ever by a pitcher in his first MLB season after coming over from Japan.

Only Koji Uehara (27 games) in 2013 with the Boston Red Sox amassed a comparable streak longer than the one Hirano is experiencing. Shigetoshi Hasegawa (25 games) put together a similar streak of relief appearances without surrendering a run for the Seattle Mariners in 2003.

However, neither of those pitchers put their streaks together in their first season in the big leagues like Hirano has done.

Former Chicago White Sox reliever Shingo Takatsu provides the best comparison. In 2004, he notched 24 straight scoreless appearances out of the bullpen as a 35-year-old MLB rookie coming over from Japan. Hirano’s 25th-straight scoreless outing gave him sole possession of that record as well.

If we expand the comparisons to all MLB players, Brad Ziegler’s rookie accomplishment with the Oakland Athletics is worth noting. The right-hander with the wonky sidearm delivery pitched 29 straight scoreless games in relief to start his MLB career. Still, he wasn’t dealing with the same culture shock, language barrier and tangible differences in the game that Hirano faces.

The all-time record for consecutive scoreless outings out of the bullpen is held by Craig Kimbrel at 38 in a row — accomplished back in 2011 with the Atlanta Braves.

Hirano’s got a long way to go to hit that mark, but veteran savvy, a rock-solid defense behind him and some fortunate breaks have already placed him and his streak in rarified air.