Voters may get final say on renewable energy initiative 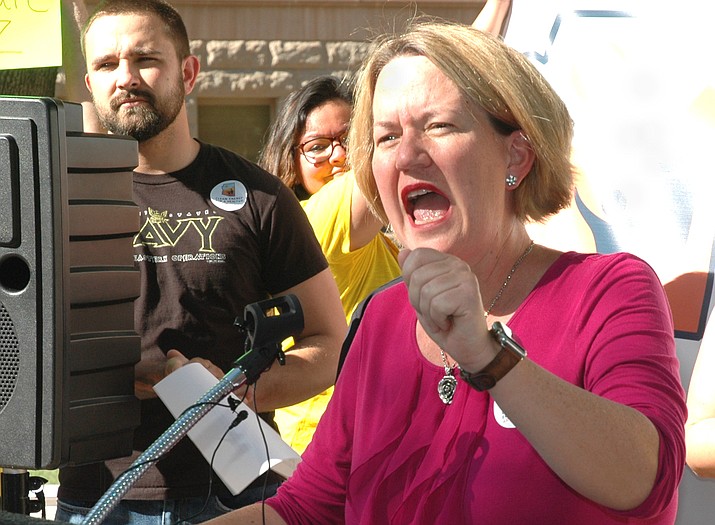 Former state utility regulator Kris Mayes details Thursday why she believes voters should support requiring electric companies to produce half their power from renewable sources by 2030. Backers of the plan submitted more than 480,000 signatures on petitions to put the issue on the November ballot. Capitol Media Services photo by Howard Fischer

PHOENIX -- Pushing ahead where utility regulators so far will not, advocates of more renewable energy filed more than 480,000 signatures Thursday to put the question on the November ballot.

The initiative, financed largely by California billionaire Tom Steyer, would require electric utilities to get at least half their power from solar, wind, biomass and other renewable sources by 2030. That compares with the current decade-old mandate, adopted by the Arizona Corporation Commission, for a 15 percent goal by 2025.

The measure needs for the Secretary of State's Office to find at least 225,963 of those signatures to be valid.

A challenge already is anticipated by a group called Arizonans for Affordable Energy, being financed largely by Pinnacle West Capital Corp., parent company of Arizona Public Service. Spokesman Matthew Benson has claimed that many of the circulators are convicted felons who, unless their civil rights were restored, are ineligible to gather signatures.

If it survives, expect APS to take the lead in trying to convince voters to reject the plan. Utility executives claim it will lead to higher costs, a claim disputed by advocates.

They also contend it could lead to the shutdown of the Palo Verde Nuclear Generating Station, the nation's largest atomic power plant. APS is the majority owner.

That goes to the issue of more Arizonans installing rooftop solar to generate their own power and sell the excess back to utility companies.

If the amount of solar being generated exceeds the overall system demand, they argue, there's nowhere to sell all the power being generated from Palo Verde. More to the point, they say nuclear plants can't be simply turned on and off as needed.

Initiative organizers have produced their own studies which they say contradicts the claim that the nuclear plant could end of being mothballed. And they cite figures that say solar can be generated for less than 3 cents a kilowatt hour, less than any other nuclear or fossil-fueled source.

APS reports it currently generates about 12 percent of its energy from renewable sources which includes not just utility-owned plants but the amount of power being generated by customers through rooftop solar. For Tucson Electric Power the figure is 13 percent.

The utilities have sought to have the question of what's a reasonable goal -- and when -- left to the five-member Arizona Corporation Commission which, for the moment, is constitutionally empowered to make such decisions. Mayes, however, said voters would be justified in removing that constitutional authority.

"Our utilities have made the unprecedented choice of spending millions and millions of dollars in dark money to get their own regulators elected,'' she said.

That includes $3.2 million spent by two groups in 2014 that refuse to disclose their donors to elect Republicans Tom Forese and Doug Little. APS has refused to confirm or deny any of that money came from the company.

Two years ago APS made no secret of the fact it put more than $3.9 million into the general election campaign in the successful bid to ensure the election of three other Republicans.

"While I would love for this to be something that the Corporation Commission would be willing and able to do, they unfortunately have not done that,'' said Mayes, who also is a Republican.

Earlier this year APS crafted and got lawmakers to sponsor what they hoped would be a competing measure on the November ballot. It would have mandated that 80 percent of energy come from renewable resources.

But the companies would be given until 2050 to meet that goal. And it would have allowed the utilities to count nuclear power as renewable.

Mayes specifically mentioned air quality, though she focused on carbon dioxide which, while a greenhouse gas, is not technically a pollutant. And nuclear power plants produce no emissions.

But Mayes said she and other supporters of the plan don't want that included in the definition.

"Nuclear energy, No. 1, is not renewable, and No. 2, is far more expensive than all other forms of renewable energy,'' Mayes said.

There's also the fact that nuclear plants produce their power by creating steam to drive turbines. And that, in turn, requires water, though Palo Verde is using wastewater.

One of the arguments against the initiative has been that it makes the state more dependent on sources of power that, by definition, are less reliable: The sun doesn't always shine and the wind does not blow. But Mayes said there are advances in battery storage technology to take care of that issue.

That battery technology has not gone unnoticed, at least by one current member of the commission. Andy Tobin is crafting a renewable energy plan of his own which pushes utilities to look to energy storage.

Tobin's plan, however, is closer to what the utilities themselves proposed, with an 80 percent goal by 2050, and one that includes nuclear power.