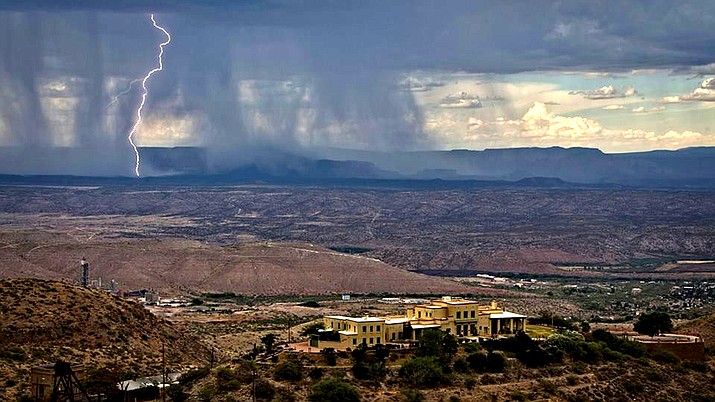 Jerome photographer Ron Chilston captured this thunderstorm photo late Friday afternoon. Even though the Verde Valley may not have received much rain, Chilston reports that this was monsoon action rolling north on the Mogollon Rim looking northeast from his porch in Jerome. There is a 20 percent of thunderstorms today and it is increased to 40 percent Monday, according to the National Weather Service. Photo by Ron Chilston

As the season’s first monsoon brings dust storms to Phoenix, Verde Valley residents can expect to see some much-needed rain. Some may have already experienced scattered thunderstorms over the weekend.

David Byers, a meteorologist with the National Weather Service based in Flagstaff, said to expect more storms throughout the coming week. This dramatic weather shift is coming right on time, too, according to Byers.

“Normal monsoon season tends to start after the Fourth of July,” he said.

While residents may have experienced rain early last month, this will be the first true monsoon of the season, Byers said.

“In June, there was a monsoonal flow,” he said. “It was helped with a hurricane off the Pacific Coast but that was just a tease and not really a true monsoon.”

This year, Byers said will be an “above normal” monsoon season.

What makes this a true monsoon is that now meteorologists are seeing a “classic flow of pressure,” Byers said.

According to the National Weather Service, most of the year low-level winds in the region blow from land toward the sea. By late spring, however, solar heating causes temperatures to skyrocket and surface air pressure to fall. This forms an area of low pressure known as thermal low. Eventually, the pressure difference increases until the cooler and more humid air over the ocean is drawn to the hot, dry air on land. This occurrence eventually develops into thunderstorms.

Yavapai County has been under fire restrictions amid the combination of high winds, high temperatures and lack of moisture.

Byers said meteorologists expect to some drought relief in the next several weeks.

“We can see some making up for moisture,” he said, “It will be a few weeks before we get the fuels to wet down and there probably will still be fire danger for a week or two more before the area gets saturated.”

The group advises all to “Stay out of washes, riverbeds, and take higher ground if you downstream from a storm.”

“Certain weather patterns can focus flooding risks anywhere over the U.S.,” according to a public post by the group’s Facebook page. “Make sure to be familiar with the area you live and work in, so you can act quickly and stay safe in the event of a flash flood.”