Musicians worth their salt this week at Vino Di Sedona 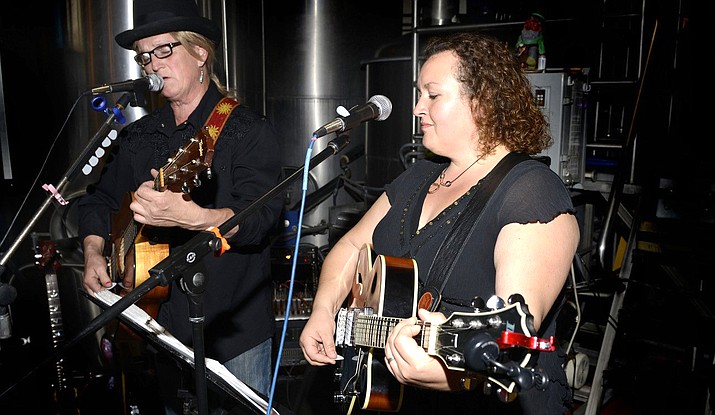 Sugar Moon is a multi-instrumentalist duo, whose rock, blues, folk, pop and retro covers get crowds dancing, singing and clapping for more.

Vino Di Sedona is the place to be on a Wednesday night listening to Rick Busbea, July 11, 7-10 p.m. If you ask Rick to label his music style, he will jokingly tell you it’s “Caribbean Country Classic Rock.” As he plays favorites by artists ranging from Kenny Chesney and Johnny Cash to Van Morrison and Marshall Tucker, it’s easy to see his point. “Rick adds his own flavor to the songs that he covers and is one of Sedona’s favorite entertainers,” says Vino Di Sedona owner, Wes Schemmer. Rick does play some original music, but his passion is cover songs to take his audience down “memory lane.” This belief led to the creation of the “Rick Busbea Jukebox” so his audience can pick favorite songs for him to play.

Rock n’ Roll with Life is Beautiful at Vino Di Sedona on Thursday, July 12, 7-10 p.m. KB Bren is singer-songwriter and Sedona resident with a life-long music career. In the 1990’s and early 2000’s KB played with well-known bands, such as Grateful Fred and Cold December. KB will be playing his newer originals, and old favorites with a few covers mixed in. KB is joined by guitarist Michael Joseph, and percussionist Wing.

Friday Night, July 13, is guaranteed to be a fun night of toe-tapping and singing along with Sugar Moon, Gioia and Laura Jane, 7-10 p.m. Sugar Moon is a multi-instrumentalist duo, whose rock, blues, folk, pop and retro covers get crowds dancing, singing and clapping for more. Gioia Quisumbing’s vocals more than impress, and her ukulele playing adds a fun factor. Laura Jane Tracy’s guitar and bass playing, moving originals and savoir-faire make them a unique pair you must see and are sure to enjoy.

Vino Di Sedona’s Saturday July 14th Wine Tasting is accompanied by music by Paolo, 3:30-6 p.m Paolo is an accomplished vocalist/pianist known for putting a delicious twist of romance back into jazz. His audience loves to hear his new arrangements of the great romantic songs of the past. His musical style is a modern blend of breathy vocals, rich harmonies and soulful rhythms. His “best musical friend” is his keyboard, and his “favorite song” is the one he is singing each moment.

Following Paolo on Saturday night is international singer-songwriter Darius Lux, 7-10 p.m. Darius is an award-winning artist who specializes in classic, uplifting pop with soulful vocals. Lux plays classic covers from Van Morrison to John Mayer, and his original songs connect with the heart through inspiring themes that range from empowerment to romance. His smooth voice and looped guitar stylings create an earthy blend of popular music, rock and reggae that you can relax or dance to.

Darius’ life has been one of expansive adventures. Originally hailing from London, he’s been creating music almost as soon as he could talk. His influences range from Sting, Otis Redding, U2 to OneRepublic, Jack Johnson, and Jason Mraz.

Darius went to school in NYC, after which he worked for Sony/Warner Chappell writing songs for artists such as Daryl Hall and Jennifer Lopez. After living in New York, Darius traveled the world for a year, embarking on a life-changing pilgrimage that led to a move to Hawai’i, where he recorded his debut album, “Arise.”

Next moving to Los Angeles, Darius put together a band, released several more albums, “Time is Now” and “We The Living,” and music videos. All three of his albums feature songs that have been in film (The Butterfly Effect 3, Puncture Wounds) and TV (NB NBC, MTV, VH1, History & Discovery channels, Style Network and Oxygen Network). For more information visit dariuslux.com.

It’s Sunday-FunDay at Vino Di Sedona and Rick Busbea is back with his live juke-box and more “Caribbean Country Classic Rock.” Check the Vino Di Sedona calendar for Rick’s dates, he’s there a few times every month. July 15, 6-9 p.m.

Music Mondays rock on at Vino Di Sedona with Saith (Näthan Gangadean) on July 16, Saith is an award-winning local singer-songwriter, music producer, yoga teacher, and spiritual hike guide who is considered by many to be Sedona’s best talent. Saith performs solo and with his band performing classic and modern rock songs that will have you on your feet dancing, as well as his original music.

Every Tuesday night at Vino Di Sedona Dan Rice hosts the area’s best Open Mic. Each musician is allotted time to play, and it’s a fun night for all. Musicians and audience members get to hear different musicians performing a variety of genres; all music styles are welcome. Open Mic starts at 6 and runs until 10, musicians are encouraged to arrive early.

Vino Di Sedona Fine Wine and Craft Beer, is located at 2575 W SR 89A in West Sedona, enjoy our large outdoor patio, For more information or to see the full calendar of events, visit www.VinoDiSedona.com. 928-554-4682