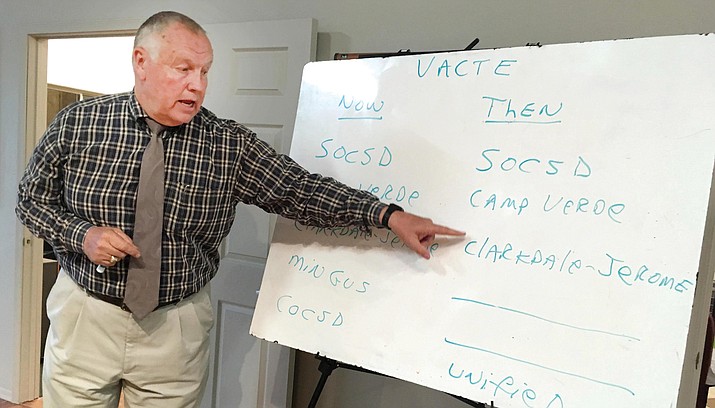 Such as the community’s Joint Technical Education District, Valley Academy of Career and Technology Education.

“Nobody anticipated that a JTED could be affected by the termination of a district,” Tim Carter said Tuesday to the Valley Academy School Board.

Tuesday, Carter said he has “no idea” how the community’s voter-approved Joint Technical Education District would look should Cottonwood-Oak Creek and Mingus Union end up merging into one district.

But he did ask a lot of questions, mostly rhetorical.

“Is the new unified district going to join?” Carter asked. “What happens to the VACTE tax, times two? The five-cent levy? What happens if this happens in another county? What if only three districts make up the JTED?”

Carter did say that he knew of no other school district in Arizona that would be impacted by SB 1254, and called the bill Cottonwood-Oak Creek and Mingus Union “specific.”

Carter’s office – specifically Carter – has been charged with creating an information pamphlet for voters to best understand the pros and cons of consolidation.

Before Carter can compile the data that belongs in the pamphlet, he’ll need to understand it first.

“I’m not giving anybody answers,” Carter told the board. “I have no answers. We’re on unchartered ground. But everyone would be impacted to some degree.”

By everyone, at least everyone in Valley academy’s world, that also means Clarkdale-Jerome, Sedona Oak Creek and Camp Verde’s school districts.

“When a political subdivision ends, that’s it. No connection at all to a new district,” Carter said. “Only the voters can change the makeup of VACTE. Granted, [Cottonwood-Oak Creek and Mingus Union] would be replaced by a new unified district, but there’s no connection to VACTE. The voters did not approve this new district.”

Which means that once – or should the two districts consolidate -- the students in the new district would “no longer have access” to career and technical education programs through Valley Academy, Carter said. Until an election is held that connects the new entity with Valley Academy.

Said Valley Academy Board Member Leland Wieweck, “The logic is that you need enough member districts to make it a valid effort to save funds and have a joint services agreement.”

Carter then interpreted Arizona Revised Statute 15-392 that “you’d have to have at least two or more schools.”

Carter also said that a consolidation of the Cottonwood-Oak Creek and Mingus Union school districts “potentially could affect any JTED with a union district.”