Life in the Slow Lane: Humidity 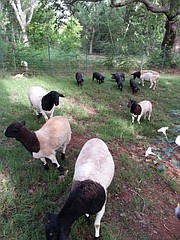 Humidity isn't something most people, including Arizonans, associate with Arizona, but we have entered our season of damp air. Just like in Southeast Asia, our Monsoon storms have arrived, bringing torrential rainfall and the usual flash floods. I only mention this because this year our Monsoon season opened with a storm so powerful that it sent a flash flood right through my property.

Actually, the flood might not have happened if not for our previous months of drought. Winter is usually our rainy season in this area, offering up days of steady, drenching moisture and some snow. But this year we had nary a storm from October through March, and only a few, pitiful rainy days between March and the start of Monsoon season. Combine that with the fact that my house sits in Oak Creek Valley while just across the road the land begins to rise in a series of steep inclines that lead to the top of House Mountain. Those hills are all desert landscape -- lots of bare dirt, rocks, mesquite, and cactus. With the land drier than usual, it's no wonder the water rolled.

Let me say, there's nothing like discovering an impromptu waterfall on your property to remind you of how insignificant you really are. That first storm was so violent that it sent boulders tumbling and overwhelmed all of my drainage routes, leaving piles of debris in its wake. Since then, there's been a welcome spate of rain every day. Thankfully, none of them has been as violent as that first one. As I write this, I'm watching today's storm clouds piling up behind House Mountain.

While I'm thrilled with the moisture and these cool days -- daily temperatures haven't even come close to 100 degrees in a week -- all this moisture means humidity. Fifty-five percent, my thermometer informed me yesterday just before it began to rain. Although it's nice to have curly hair, I'm dying, wilting, melting into a pile of perspiration. I can see all of you who live or have lived east of the Rockies sneering at me. But this is Arizona. It's a dry heat! We're not supposed to drip with sweat.

I'm so uncomfortable that I've begun making up excuses not to do my hour or so of outside work before I sit down at the computer. The grass is too wet to mow. Why drive fence posts now when the ground will be even softer after this afternoon's storm? If it weren't for the piggies, I'd never leave the house.

As I fully expected, they're already outsmarting me. After pig-proofing the pasture (or so I thought) the other day, I let them out of the orchard. A few hours later I discovered them lounging in the chicken coop after consuming all the chicken food.

I herded them back to the orchard and redid my defenses, then tried releasing them again the next day. Just in case, I made sure all the chicken food was stacked out of their reach. Sure enough, they escaped. I found them in the now half-fenced back pasture, enjoying a wallow.

Rather than get the t-post driver and finishing the fencing, I sighed and left them there. After all, the back pasture is where I want them for the rest of the summer. I blame my laziness on the humidity. My "leetle gray cells" are getting too wet.