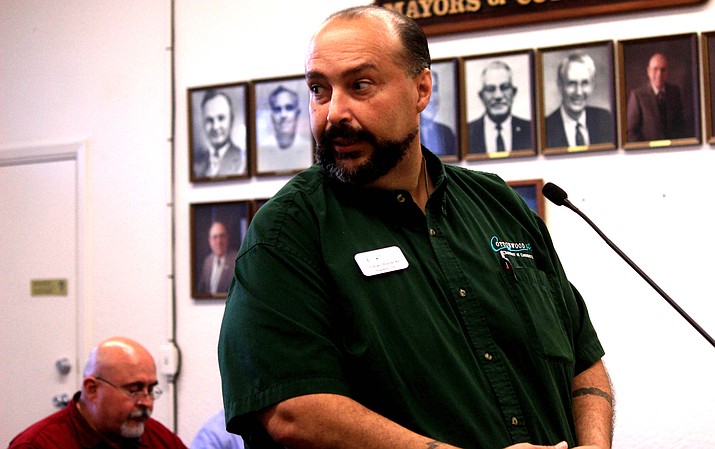 President and CEO of the Cottonwood Chamber of Commerce, Christian Olivia del Rio said the OTA would still keep and maintain their separate account as an accounting system. To ensure transparency, members of each board will attend each other’s board meetings. VVN/Kelcie Grega

In order to receive funding from the city, OTA is required to submit quarterly reports of their financial statements. In May, former OTA treasurer Traci Koelzer fled the city after embezzling more than $100,000, according to Cottonwood Police. Because of this, the group has had difficulty submitting current data to the city as police continue their investigation.

Despite the pitfalls, OTA has been working to gain assurances from the city.

While addressing council Tuesday, OTA Board President Brenda Clouston said the group has sought partnership with Cottonwood Chamber of Commerce.

“The Chamber will act as our fiscal agent,” she said. “Our funding would flow through theirs and they would release funds for us through a separate Quickbooks account.”

Clouston said debits would now go through approval of two individuals. They will also implement other check and balances to keep the organization accountable.

“We will remain separate entities and OTA will be a branch of the chamber,” she said.

President and CEO of the Cottonwood Chamber of Commerce, Christian Olivia del Rio outlined the details of the partnership through the Chamber’s view.

“My board has come to the conclusion that it is best to step up and help them out,” he said. “I will become a signer on their checking account, so all money would flow through the Chamber office.”

Olivia del Rio said the OTA would still keep and maintain their separate account as an accounting system. To ensure transparency, members of each board will attend each other’s board meetings.

The organizations will also be partnering on marketing Old Town, according to Olivia del Rio.

“I think there is a lot of opportunity for us to grow,” he said.

From the dais, Cottonwood Vice Mayor Kyla Allen said a partnership between OTA and the Chamber is exactly what she wanted to hear.

“I was very frustrated last time because from my point of view our hands were tied because even though we love the Old Town Association, our number one responsibility is a fiduciary responsibility to the citizens of Cottonwood.”

Allen said without assurances, the situation “was a killer.”

“Brenda understands that I would give her everything in my pocket but that’s not my pocket. It’s the citizens’ pocket,” she said.

Now, Allen said she is “relieved” that the two organizations have partnered together.

The city decided to table the item on approving funding for the next fiscal year until they see the results from the partnership.