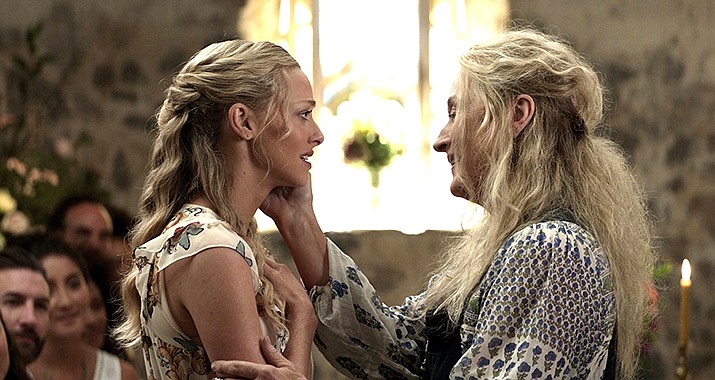 From start to finish, Mamma Mia! Here We Go Again is a touching yet high-energy and vibrant sequel to 2008’s hit movie Momma Mia!

Who could forget that 2008 very entertaining film, with its big-name stars, its music and dancing and its Greek island setting. Now we have the sequel, simply and effectively subtitled, Mamma Mia! Here We Go Again.

This film takes place some years later, with many of the same characters and actors. And the story alternates between today and the early years of the principal character in the original film, Donna (Meryl Streep).

Donna is now gone, having died in the recent past. Her daughter, Sophie (Amanda Seyfried) has her mind set on reopening the island hotel her mother managed. Sophie has a young man, Sky (Dominic Cooper), whom she loves but is separated from him.

In flashbacks, we see young Donna (Lily James), with her two close friends, Tanya and Rosie, as they are graduating from college. Donna is the valedictorian. After her introduction by the Vice Chancellor (Celia Imrie), she speaks a few inspired sentences and then breaks into song and dance. That ignites the energy and enthusiasm of the whole graduating class and some of the faculty.

Donna leaves her two friends, Tanya (Jessica Keenan Wynn) and Rosie (Alexa Davies), to set off on a tour of the world. In each of several places, she meets a young man and has a brief affair before she moves on. Those are the three men, one of whom will be Sophie’s father. Of course, remember that Donna never knows which of them is the actual father and Sophie calls them all “Dad.”

Sophie is planning a big reopening and invites a host of friends and relatives, including the now middle-aged Tanya (Christine Baranski) and Rosie (Julie Walters). Her three ‘Dads’ — Sam (Pierce Brosnan), Bill (Stellan Skarsgard) and Harry (Colin Firth) -- show up. A fierce storm the morning of the party wrecks the party venue. It’s heartrending, but it doesn’t stop the party.

Hundreds of mainland people come to the island by boat and the celebration takes place, with singing and dancing by all the people on the island. There are a couple of surprise appearances for Sophie. Sky shows up and that cements their love. Good, because she is pregnant with his child. Sophie’s grandmother, Ruby (Cher) helicopters onto the scene and makes a dramatic entrance. She is seen by Fernando (Andy Garcia), a friend and advisor to Sophie and they recognize each other from a past relationship. They burst into the song about ‘Fernando’ in a highlight of the film.

The story in Mamma Mia! Here We Go Again is interesting and well played. What makes this film exceptional, as in the first one, is the music (from ABBA) and dancing of the characters. There are solos by Sophie/Donna, Grandma Ruby and in a brief ceremony, Meryl Streep appears as an apparition and sings a loving tribute to her family. The group dancing, from three friends to hundreds of participants is amazing in its vibrancy and precision.

Mamma Mia! Here We Go Again was written and directed by Ol Parker, who also wrote the screenplays for the memorable The Best Exotic Marigold Hotel in 2011 and its sequel in 2015. It kinda leads me to wonder, “What’s next, Mr. Parker?”