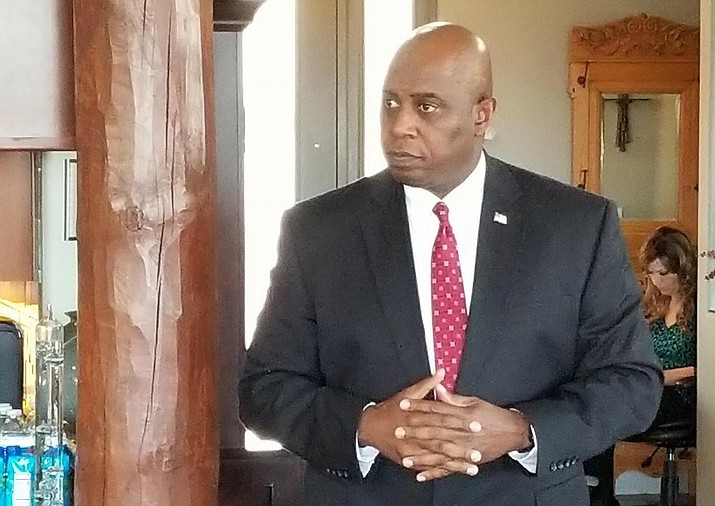 Snowflake. What has prompted me to run? I am an outspoken advocate of the 2nd Amendment, health care issues, and common-sense approach to education funding.

I am an avid supporter for teacher pay raises, bonuses, and performance-based incentives, reclaiming federal lands in Arizona, and creating sound forestry management. I believes in rural development programs that generate jobs and revenue, improving the internet infrastructure, and combating the opioid and meth issues.

I aggressively support pro-life organizations such as Living Hope and Catholic Charities and fights to put an end to sexual harassment and assault in our schools, communities.

I firmly believe that local problems require local solutions, not state oversight, and interference. I am a champion of rural Arizona issues, standing for American values and promoting fiscally responsible state spending.

I understand we need a real balanced budget that reflects less government waste and a common-sense approach to states expenditures. I believes it’s time to hold our elected officials accountable for their actions, and inactions.

Voters deserve outstanding leadership, I will provide that leadership to the voters of the Sixth Legislative District.

Question 2: What do view as the most important issues facing the Verde Valley and what legislative remedies would you sponsor to deal with those concerns?

I believe it is the regional Instability in the area. The legislative should conduct a partnership program with Verde Valley and invest studies with community leaders in finding a way to stabilize the Regional issues.

Question 3: What is your position on immigration reform and what is the state’s role in concert with the federal government in achieving fair, reasonable immigration policy in Arizona and the other border states?

First and foremost we need to support President Trump’s agenda and build the wall. Amnesty rewards illegal behavior, incite more and is fundamentally unfair to those who have come here legally, said Kristen Williamson, a spokeswoman for FAIR. The deleterious is in the details.

First, no move towards permanent residency can begin until some new commission of border condition politicos proclaims that the brink is undisturbed. Unless the government exchanges its catastrophic “War on Drugs,” there will be incidents along the limit related to drug trafficking that can be the application as a cloak to freeze everything for decades.

Allowing exotic workers of every ability level to contribute to our economy will help broaden the duty base and adroitness our demographic realities.

Our older population is exploding, while our birth rate is drip-drop. By 2035 there will be roughly two workers for every retiree compare with 16 workers per retiree in 1950.

The more workers we have defrayal into the system, the better we’ll be useful to back our aging population. There are an estimated 11 million undocumented immigrants currently residing in the United States.

It is unrealistic and inhumane to carriage these individuals from their families and lives in the United States. These immigrants should be offered a track to constitutional status and in the end, earned citizenship. This wake to citizenship should be realistic, rather than being so grievous that it hinder integration.

Allowing these immigrants to regularize their status will not only strengthen our public assurance, but will also stimulate the economy and advanced America’s rich, vibrant, and diverse educate.