Passport to success for Macy Ahlers: 22-year-old embarks on journey as English teacher at Mingus Union 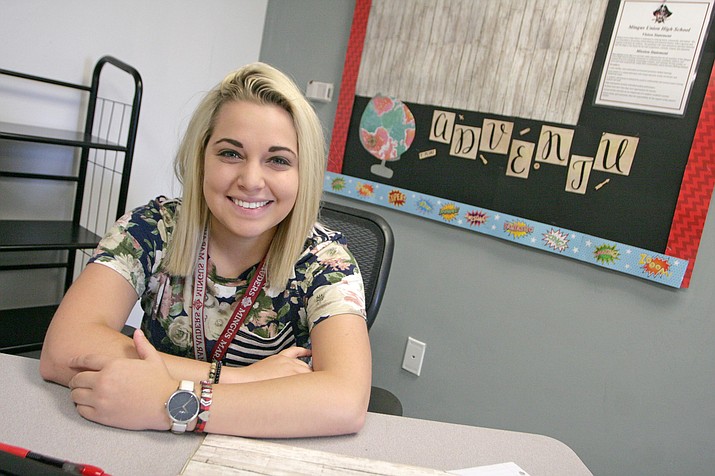 COTTONWOOD – Macy Ahlers isn’t too much older than the students she now teaches.

Ahlers, all 22 years of her, begins her career as an educator today at Mingus Union High School.

The theme in her classroom is Passport to Success: Let the Adventure Begin.

For Ahlers, the adventure is not just a learning experience for the students in her English classes.

The adventure is also hers, as Ahlers has been an Arizona resident barely two weeks.

“I chose the travel theme because we’re all going places in life,” Ahlers says.

From Naper, Nebraska, Ahlers grew up on a farm where her family raises cattle and plant crops.

Growing up, it was a toss-up between teaching English or becoming an athletic trainer.

Early in her collegiate career at Augustana University in Sioux Falls, South Dakota, she figured out that the process for becoming a trainer “wasn’t for me.”

So Ahlers began taking secondary education courses. “From there,” she said, “I never stopped.”

As she approached graduation earlier this year, Ahlers had yet to look for her first teaching opportunity.

“This is where I went to a job fair for teachers in Sioux Falls,” she said. “It was highly recommended, so I figured I would see what options were open for me.”

Visiting the booths, one by one, Ahlers “ran into” what she calls the “Arizona corner,” where she met Penny Hargrove, then a first-year superintendent at Mingus Union.

Ahlers says that Hargrove was the “most energetic and sweetest superintendent I have ever met.”

“After talking with her for a few minutes, I knew that Mingus Union High School was going to be a top choice for me,” Ahlers says. “I also told Dr. Hargrove that it would be a perfect place for me since I love the outdoors, plus I was getting tired of the cold winters and 18 inches of snow.”

Ahlers also says that her aunt “influenced me to move away from the Midwest and try something new.”

“I knew it would be hard being 20 hours away from home, but I also knew that this community and people would take care of me,” she says.

Each day, Ahlers will teach two periods of freshman English, and three periods of ELL - English language learners. What does she expect to accomplish on her first day?

“I’ll give them my ground rules,” she says. “But the main thing is making connections.”

It’s that passion for building relationships that Hargrove says were why Mingus Union “needed her here.”

“That’s what makes Mingus,” Hargrove says. “When I visited her and interviewed her, her energy, her passion for freshmen, she really wants to work with kids in a mentoring way.”

Thursday is the first day of school for sophomores, juniors and seniors.