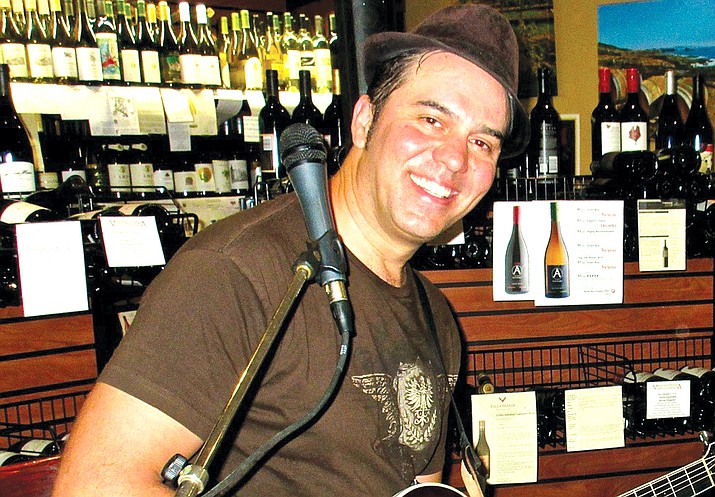 The first Wednesday of the month brings Texas Americana, folk, and country blues by singer-songwriter Hank Erwin to Vino Di Sedona, June 6, 7-10 p.m. Hank has an incredible history of life experiences that have resulted in a collection of songs that tell his story. After five years as a merchant marine he logged over 1,000 days at sea, traveled over 200,000 nautical miles, was US Coast Guard certified as an Able Bodied Seaman, and delivered roughly 10 million tons of cargo. He made more money than he’d ever seen, blew more money than he’d ever seen, and lost all control of his life off the boat which included any hopes of a music career.

He stepped off of the SS Wilfred Sykes on January 10, 2014, and he never went back. He had no way of knowing that day that music would soon become his focus again, and that he would spend most of the following year on tour, or that he’d spend the year after that fighting cancer ... and touring, or that he’d become the first member of his family to survive cancer.

Rock n’ roll with life is Beautiful at Vino Di Sedona on Thursday, June 7, 7-10 p.m. KB Bren is singer-songwriter and Sedona resident with a life-long music career. In the 1990’s and early 2000’s KB played with well-known bands, such as Grateful Fred and Cold December. KB will be playing his newer originals, and old favorites with a few covers mixed in. KB is joined by guitarist Michael Joseph, and percussionist Wing.

Enjoy a night of classic rock with Dan Rice and Chris Seymour On Friday June 8, 7-10 p.m.. Dan and Chris a long time Sedona musicians who are well known and true crowd pleasers. Dan Rice currently hosts Vino Di Sedona’s Open Mic Night every Tuesday night. Don’t be surprised if you hear an original song or two as Dan has written many compositions himself.

Vino Di Sedona’s Saturday June 9th Wine Tasting is accompanied by music by Paolo, 3:30-6 p.m.. Paolo is an accomplished vocalist/pianist known for putting a delicious twist of romance back into jazz. His audience loves to hear his new arrangements of the great romantic songs of the past. His musical style is a modern blend of breathy vocals, rich harmonies and soulful rhythms.

Following Paolo on Saturday night is international singer-songwriter Darius Lux, 7-10 p.m.. Darius is an award-winning artist who specializes in classic, uplifting pop with soulful vocals. Lux plays classic covers from Van Morrison to John Mayer, and his original songs connect with the heart through inspiring themes that range from empowerment to romance. His smooth voice and looped guitar stylings create an earthy blend of popular music, rock and reggae that you can relax or dance to.

Darius’ life has been one of expansive adventures. Originally hailing from London, he’s been creating music almost as soon as he could talk. His influences range from Sting, Otis Redding, U2 to OneRepublic, Jack Johnson, and Jason Mraz.

Darius went to school in NYC, after which he worked for Sony/Warner Chappell writing songs for artists such as Daryl Hall and Jennifer Lopez. After living in New York, Darius travelled the world for a year, embarking on a life-changing pilgrimage that led to a move to Hawai’i, where he recorded his debut album, “Arise.” For more information visit dariuslux.com.

Yarrow returns to Vino Di Sedona on Sunday June 10, 6-9 p.m.. Yarrow was formed in 2011 when three musicians, Patty and Tom Hoisch and Patricia Fonseca, shared a desire to push the boundaries of the familiar. Recognizing how diversity in their backgrounds could allow their collaboration to become larger than the sum of its parts, they began to cross folk and rock music with classical music and poetry. The result is a continually evolving mix of electric cello, acoustic guitar, djembe, harmonized vocals and poetic lyrics in the Indie genre, offering many original songs and a few familiar favorites with unexpected twists.

Music Monday features Sophia Angeles, June 11, 6-9 p.m.. Sophia is a pop singer-songwriter with a fresh original sound who recently relocated to Nashville from the red rocks of Sedona, Arizona. Captivating audiences with her uniquely arranged cover tunes and well-crafted original music, Sophia’s powerful vocal style, melodies, and lyrics are already making waves in music city. Singing, performing and writing from an early age, Sophia plays guitar, piano, ukulele, and is a prolific songwriter. She has been performing professionally for over five years in hotels, restaurants, as well as public and private events.

Sedona’s best Open Mic night, hosted by Dan Rice is every Tuesday, 6-10 p.m., at Vino Di Sedona. Each musician is allotted an amount of time, or number of songs, and every week brings a variety of new talent along with regulars like KB Bren, Jim French, Walt Young, Randy J, Lisa Hart, Tim Young, and Dave Rice who frequently play at Open Mic.