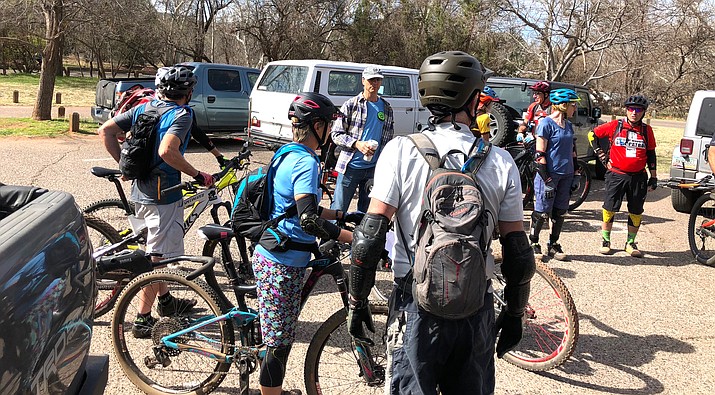 Upsetting many an the community at the time, the Verde Valley Cyclists Coalition received a letter dated January 17, 2017, from the Arizona Department of Transportation threatening immediate removal of the bike lane markings and signage on SR 179, unless the VVCC agreed to sweep the bike lanes from the Ranger Station to Back-O-Beyond Road within a month and continue quarterly sweepings moving forward.

At that point, the VVCC had 65 members, no sponsors, and zero funds for sweeping. Absolute Bikes, Bike & Bean, and Commerce 89 Development had provided funds for sweeping from 2010 – 2013, but by 2014, sweep funding had dried up. VVCC notified ADOT on December 9, 2014 of this fact, and that it could no longer sweep moving forward.

Nothing happened until a road cyclist fell and broke his hip in 2016, due to bike-lane debris near the Collective. That prompted fellow riders to again approach ADOT, as to why the lanes were not swept. ADOT’s January 17th letter states, “There are existing safety concerns on the SR 179 bike lanes due to neglected maintenance.” The reason the VVCC had this sweeping responsibility in the first place was because ADOT in June 2007 claimed it didn’t have the resources, funding and physical ability to complete the task, so the VVCC took it on.

Not to waste a crisis, the VVCC board developed and implemented what it originally thought was a three-year plan: 1) to be in compliance with ADOT’s demands, 2) to revise its governance, membership fulfillment and programs to be more responsive to the local cycling community’s needs, 3) to raise funds to ensure the sweeps were conducted with a sustainable fundraising plan and 4) to begin a grassroots effort to convince ADOT that if a small volunteer based non-profit could do it, ADOT DID have the resources, funding and physical ability to sweep.

One of the VVCC’s first efforts to spread the word of its new approach was at the Big Park Council meeting in February 2017, where $225 was raised. Fast forward to today, the VVCC:

• Raised sufficient funds to sweep the bike lanes quarterly throughout 2017.

• Voted on new governance permitting immediate election of road cyclists to its board.

• Holds free social events and bike rides for its members and guests.

• Met with ADOT Director John Halikowski in June 2017 along with our friends from the Coalition of Arizona Bicyclists.