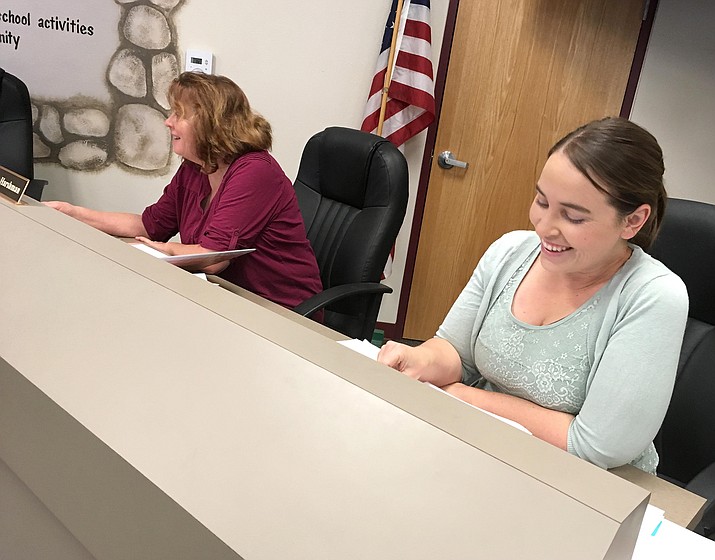 RIMROCK – Although the budget reviewed Monday by members of the Beaver Creek School District’s governing board is just a proposal, the school’s principal said that she sees the district “a little ahead” of where it was a year ago.

But the district’s teachers should expect to see a 10-percent pay increase, thanks to monies promised to the state’s schools by Gov. Doug Ducey.

Monday, Beaver Creek School District’s governing board approved the district’s proposed budget for fiscal year 2018-2019, which estimates about $2.9 million in Maintenance and Operations expenditures and perhaps, more importantly, estimates an average increase of $3,800 for its educators.

Said Sacco, District Superintendent Karin Ward is still “looking at what to do for classified staff.”

“Before this, we were planning to revisit the classified staff [wages] in January,” Sacco said.

Arizona schools such as Beaver Creek School are in the second year of current-year funding, which means that “when a student leaves or comes to the school, we provide what they need and then we come up with a plan,” Sacco said.

With four members present, the Beaver Creek School District’s governing board voted 4-to-0 Monday to approve the proposed budget, which includes an estimated $42,300 average salary for its teachers, an increase from the $38,500 average salary of its teachers employed in fiscal year 2017-2018.

The salary average does not include funds from the classroom site fund, the proposed agenda stated, “as that number changes yearly and is not in the base salary for the teachers.”

On July 9, the district’s governing board will review all salary structures “for final recommendation,” the proposed agenda stated. “Teachers and other staff will receive addendums to the contracts after that approval.”

A year ago, Beaver Creek School’s third- through eighth-grade students performed to a 14-percent Mathematics proficiency in the annual AZ Merit testing. This year, the district’s students collectively scored at a 22-percent proficiency, Principal Katrina Sacco told the district’s governing board at its monthly meeting on June 11.

“Of course we’d like to be higher than 22 percent,” Sacco told the board on June 11 at its monthly meeting. “But we’re working on that.”

The district’s AZ Merit scores in English, Language and Arts – ELA – were a collective 22.16 percent proficiency, an improvement on the 20.83 percent from fiscal year 2017.

“A lot of people have worked very hard,” Sacco said.

In 2015 when AZ Merit first was used by state’s schools for its standardized testing, Beaver Creek measured 13 percent proficiency in Mathematics, 11 percent in ELA.

Board member Jo Burke, then board member Perry Krowne requested that the district provide materials including curriculum so the board could decide in July whether to accept the new programming.

Each year, Beaver Creek School District distributes a parent survey with an approximate return rate of “about 25- to 50-percent,” as estimated by School Principal Katrina Sacco.

Monday, Sacco presented the results of the survey to the district governing board.

The district used the survey to solicit information such as Best method of communication, how often and for what purpose does the parent use the board’s agenda, do students participate in tutoring, use of and perceptions of the school’s Friday 21st Century programming, and participation in the district’s food pantry.

Sacco told the board Monday that her goal for next year is to “get more responses.”

One board member recommended the surveys be distributed with student report cards.

“I could see mid-year,” board member Perry Krowne said.