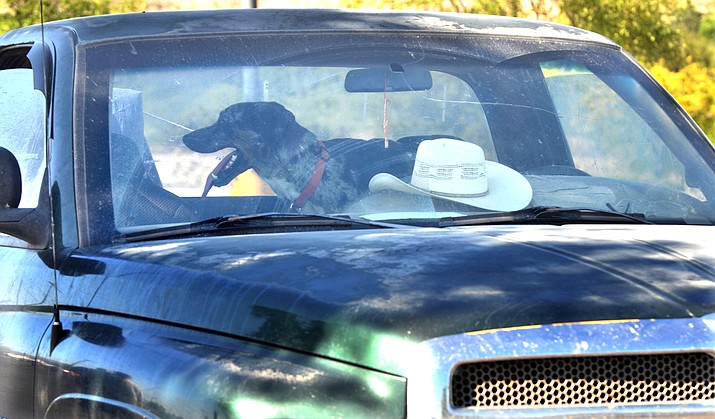 A 20-year-old Cottonwood man was issued a citation after police were called to the Cottonwood Walmart on a report of a dog locked in a vehicle in 100-degree heat. VVN/Vyto Starinskas

The Cottonwood Police Department policy is not to open vehicles with dogs locked inside in extreme temperatures as high as 100 degrees unless the dog is showing imminent danger.

“It is easy to assume that because a dog is left unattended in a motor vehicle they are in danger or dying, especially during high temperatures. However, the majority of the time that is not the case. While I do not recommend people leave their animals unattended in their motor vehicles during the summer, it is not illegal to do so,” said Cottonwood PD spokesperson Sergeant Monica Kuhlt.

The issue arose Tuesday when a dog was left in a pickup for 20 minutes in the Walmart parking lot as temperatures hovered above 100 degrees. The truck was in the shade, but onlookers expressed concern as a police officer and animal control officer waited for the owner to return. The owner returned to his vehicle after more than 20 minutes.

The officers were at Walmart responding to reports of two dogs unattended in locked vehicles, the police officer said.

First, a dog was found inside a white mini-van where the temperature was 120 degrees inside and the dog was showing “signs of distress such as panting, dry nose, dry tongue and gums, etc.” Kuhlt said in a news release. “Based on this, she (a police officer) went to remove the dog when the owner showed up. The 20-year-old male Cottonwood resident received a citation,” Kuhlt said.

Then officers found another dog barking in an unattended green pickup truck parked in the same lane.

“This dog did not show any signs of distress in terms of the heat. The dog was barking at the officers and other people around the truck and refused any water when offered. The barking was territorial and not due to heat-related distress,” Kuhlt said.

The owner was paged inside Walmart and arrived about 20 minutes later. “He was issued a written warning versus a citation because his dog was not in distress,” said the police officer’s statement.

“We do not base the decision of whether to remove an animal from an unattended vehicle on just one factor such as the temperature outside,” explained Kuhlt.

“We look at the totality of the circumstances such as the temperature outside and inside of the vehicle; the overall appearance and behavior of the animal; whether they have water or ventilation; and other circumstances that could reasonably be expected to cause suffering disability or death of the animal,” she added.

“Officers and animal control enforcement have the authority (ARS §13-2910.A.7.D) to use reasonable force to open a vehicle to rescue an animal if the animal is left in the vehicle and physical injury or death of the animal is likely to result,” Kuhlt said. “We have to be able to articulate the condition of the animal was such that it was in imminent danger of death or physical injury. If we can’t do that, then we do not meet the elements of the law.”

When asked if a bystander would have been allowed to open the doors to let the dog out, Kuhlt referred to a new Arizona law that allows Good Samaritans to “use reasonable force to remove a child or domestic animal from a locked motor vehicle is not liable for damages in a civil action” if they comply with certain conditions.

In 2013, the City of Cottonwood passed an ordinance addressing animals left unattended in motor vehicles, Kuhlt said. It states, “No person shall leave or confine any animal in any unattended motor vehicle under conditions that endanger the health or well-being of an animal due to heat, cold, lack of adequate ventilation, or lack of food or water, or other circumstances that could reasonably be expected to cause suffering, disability, or death to the animal.”

Wednesday afternoon, another scanner call was reported for police to respond to a locked dog inside a vehicle at the Walmart in Cottonwood, the third dog in two days of 100-degree heat.

“Although it is not illegal to leave an animal unattended in a motor vehicle I would recommend people leave their animals at home if they can during the summer months,” Kuhlt said.