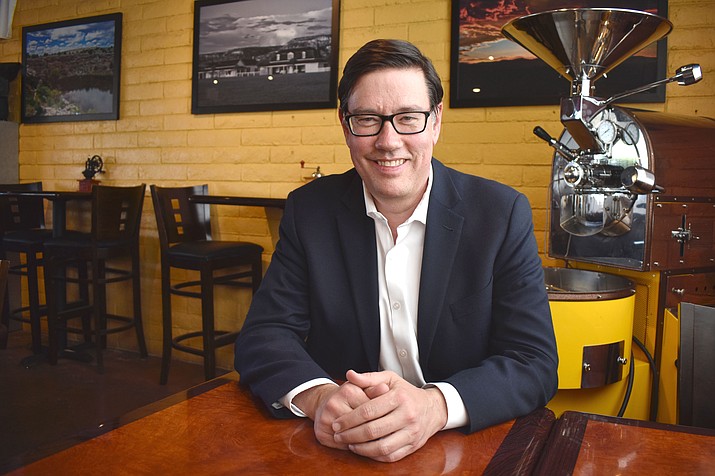 Earlier this month, Sen. Steve Farley stopped in Camp Verde to discuss his platform with the Verde Independent during his campaign in Arizona against incumbent Governor Doug Ducey. VVN/Halie Chavez

CAMP VERDE -- Earlier this month, Sen. Steve Farley stopped in Camp Verde to discuss his platform with the Verde Independent during his campaign in Arizona against incumbent Governor Doug Ducey. Farley has served as a democratic state senator for Arizona since 2013. He is currently the ranking member of the Senate Finance Committee.

Sen. Farley has focused on public transportation and education throughout his career.

“There’s nothing better than a non-stop road trip through Arizona,” Farley said.

Q: Sometimes rural regions like the Verde Valley can feel left behind in comparison to Phoenix and Maricopa County. In your campaign, you said you would be a governor for the entire state – can you elaborate on this?

“Well it helps that I’m not from Maricopa County,” Farley laughs. “Everybody has to get the investment they deserve – whether it’s in education, transportation infrastructure, healthcare – everyone deserves the opportunity to have a decent life.”

Farley cites one way, rural areas have “lost out” is the shifting of money out of gas taxes.

“For as long as I’ve been there, the majority of the legislature and the governors have been shifting money out of gas taxes that are constitutionally supposed to be spent on roads and using them for other priorities. $120 million a year. That’s money that’s desperately needed in rural areas,” Farley said.

Q: Winning positions in Arizona as a democrat is not easy. Incumbent Ducey has significantly outraised you – but what differences do you see this election year?

“I think for a lot of people they saw November 2016 as a time where they were very upset by the outcome. And they realized democracy dies in neglect. So in order to save our country, state and democracy, they’re getting involved,” Farley said. “I’m excited to see that.”

Farley stated he has seen a ride in not only democratic groups but independent groups as well.

Q: Can you tell me about your position on education?

“This whole Red for Ed movement with all these teachers walking out to the Capitol for a week, during budget week, was a phenomenal change in the way we look at things,” Farley said.

Farley said he met with teachers throughout the weeks of walk-ins and walk-outs.

“It wasn’t just Democratic teachers. I was talking with teachers constantly, meeting with groups of 10 or 20 in my office at a time, giving them the information they needed, working with them, helping them understand the process. People would come up to me and say, ‘Y’know, I’m Republican but you’re the guy I want as my Governor,’ because they saw my passion together with my experience with my ability to deliver,” Farley said.

Farley states education funding is important to him personally – both his parents were public school teachers.

Q: What is an answer to the education funding issue?

“Before the teachers showed up at the Capitol, Ducey’s last offer and best offer was $33 million dollars in the next year for K through 12 over. That budget put in 405 million next year over and above inflation – that’s not all we need,” Farley said.

“We give away every year 13.7 billion dollars in corporate sales tax loopholes alone…If you buy a three inch pipe from the hardware store you pay sales tax. If you buy a four inch pipe you don’t. That doesn’t make a lot of sense unless you’re a corporation that buys a lot of four-inch pipe in Arizona and you want a break,” Farley said.