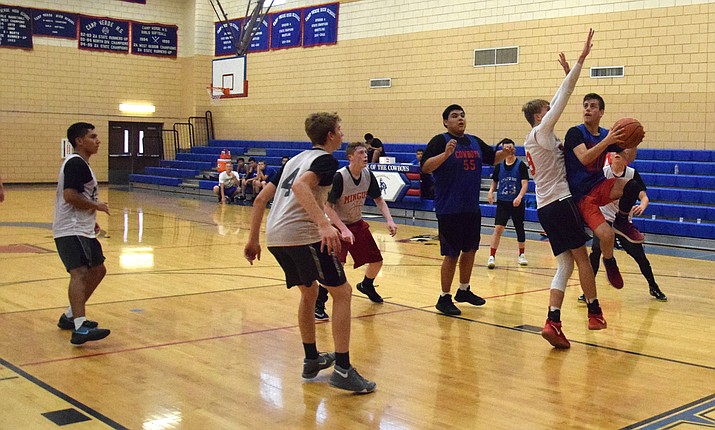 Camp Verde High boys basketball has been busy so far this summer.

The Cowboys have been at it since the end of May, practicing, hosting a camp, playing in tournaments and exhibitions.

Head coach Dan Wall said the summer has gone pretty overall for them.

“It’s been a good summer, I’ve had a lot of participation, a ton of kids that are involved, that are working, commitment level is very high, so I’ve been excited about that,” Wall said. “We’ve been competing pretty well. In the summer time there’s obviously a million things we got to work on but we’re certainly taking steps and getting better.”

The Cowboys’ summer schedule runs until the end of June.

Their first games were at the Embry Riddle tournament in the beginning of June. Then they started playing in Coconino’s summer league.

“We have our spurts, we’re playing a lot more basketball than we usually do during the summer,” junior forward/guard Abe Gonzalez said. “We’ve been doing pretty good, we’ve been competing with bigger schools. All these schools that are bigger than us, they’re tough, so that’s only going to make us better.”

In Coconino and back in Verde Valley, the 2A Cowboys have been playing 4A schools.

Gonzalez said the games against the bigger schools will help out an “insane amount.”

“It’s a little different because of the players and their height and how much stronger they are and they’re just much better teams than the normal 2A teams, so it’s just getting us better,” junior guard Jason Collier said.

The Cowboys have also mixed in teams like Scottsdale Christian, who ended the 2017-18 season ranked No. 5.

“These were great, we were really excited to play Scottsdale Christian, we know that they’ll be a powerhouse this year in the 2A, so it’s fun to see where you match up and what you gotta do to get better and compete Mingus, Flag, Coconino, there’s been a lot of good games in that area,” Wall said.

On June 29 and 30, the Cowboys will host a tournament. Wall expects about 12 teams to be there, including JV squads, from schools like Mingus Union, Winslow, Blue Ridge, Hopi, Ash Fork, Northland Prep and Chino Valley.

Wall said the returning players have been doing well.

“They’re been working on their game a lot in the offseason and so that’s been showing,” Wall said. “We’ve certainly been improving Dribbling, passing, 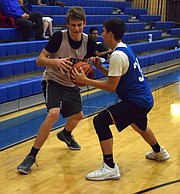 As for the younger guys, both Collier and Gonzalez said the Cowboys that are new to varsity have surprised them.

After playing mostly with the JV last year, Manny Interiano and Mason Rayburn have impressed at the varsity level this summer. Plus the rookies have done well.

“We have a real talented group of freshmen coming in for this next year,” Wall said. “About 15 of them, very engaged, working very hard, just great kids, so I’m super excited for the future.”

“It’s awesome, it’s fun,” Wall said. “There’s a lot of great competition up there. There’s actually a ton of schools coming out from Arizona. It will be a great opportunity just to play some kids that are more athletic than us and just an opportunity to see where we stack up and how we can get better and how we can compete It will be a lot of fun.”

Gonzalez said the Point Loma trip is one of the best parts of the summer.

“Everybody is really excited because it’s a just new opportunity to go up there and team bonding and some big schools, so it’s always nice to go out there and compete against some tough teams,” Collier said.