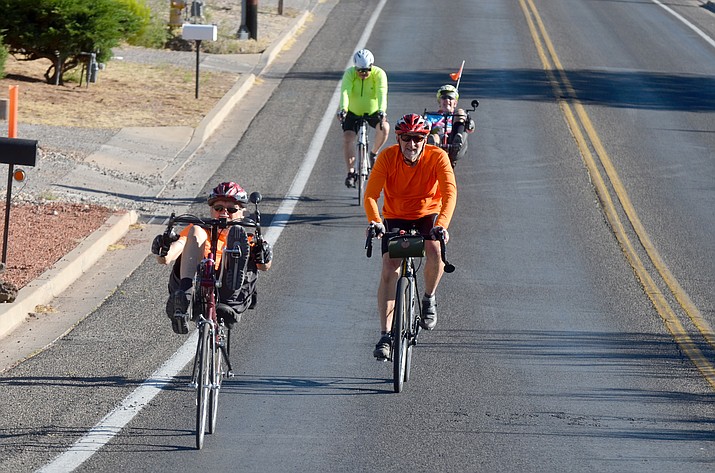 The “road diet” plan is installing bike lanes with striping, from four to five feet wide with green paint, from Walgreens to Old Town along each side of Main Street. VVN/Vyto Starinkas

If you ride a bicycle in Cottonwood, you are probably either riding on side streets to avoid traffic, or you are battling pesky motorists for space on busy throughways.

But a group of hardcore riders have a plan.

It’s is a “road diet” on Main Street, new bike lanes on Mingus Avenue, back-angle parking and a bike corral in Old Town; and a Silver designation for Cottonwood as a bicycle friendly town.

The “road diet” plan is installing bike lanes with striping, from four to five feet wide with green paint, from Walgreens to Old Town along each side of Main Street.

“We want to get more people out on the roadway commuting to work,”

The iron bike corral will be located in Old Town on the street where people will be able to park and lock bikes.

Then at the curve in Old Town, cars will use back-angle parking to see bicyclists better. This will only be about 10 to 12 spaces near Crazy Tony’s Old Town Market and the Civic Center, however.

More than 87 percent of responders said “lack of bicycle paths and lanes” was one reason why it’s difficult to ride in Cottonwood, according to a survey report released by Hezakiah Allen, Cottonwood’s Recreation Services Supervisor.

In their survey of more than 340 responders, 90.4 percent said “aggressive/speeding/unsafe motor vehicle drivers” was also a barrier to ride.

BAC member Bob Richards, who is also a member of the Verde Valley Cycling Coalition, said most of the riders in Cottonwood seem to be commuting and going to work.

Richards is part of a group of recreational riders who meet and have been riding out of Cottonwood and the Jerona Café for many years.

A revised Master Bicycle plan will be presented to Cottonwood Planning and Zoning and then to the city council. A 2009 Master Plan got Cottonwood a Bronze designation from League of American Bicyclists, but the BAC hopes the new Master Plan will lead to a Silver designation next year.

A Silver designation for a community means that it is bicycle friendly for its residents and it is good for tourism, according to BAC member Nancy Gottschalk.

The BAC has been working with the Cottonwood Public Works engineering to design the Walgreens to Old Town bike path, said Allen.

The city is considering painting the bike paths green before certain intersections to define the bike lanes, he said.

Allen said he hoped ADOT would continue the bike path from Walgreens, down Main Street to Bridgeport and SR260.

There are bike baths on several city streets such as Fir Street and 6th Street, however, many local bicyclists choose city residential side-streets to avoid busy throughways and to get to locations that bike paths do not go to.

Richards said he sees many individual riders in Cottonwood and many are on the sidewalk.

The BAC and the Public Works Department were talking about how to deal with the asphalt bumps and heaves, concrete rain gutter and storm drains, business entrances and other hazards on the bike lane route.

“We want to get more people out on the roadway commuting to work,”

The bike lane from Walgreens to Old Town has been formally approved by the city council, according to Allen, adding that he hoped they would present an updated master bike plan to council in July or August.

The BAC hopes having the master plan, the bike paths on Main Street and Mingus Avenue, the bike corral and the parking ordinance all approved will help them attain the Silver Status. Sedona has a Silver status, BAC members agreed.

“We want to get more people out on the roadway commuting to work,” Richards said. Bicycling is good for health and getting people in shape, he continued, “It’s good for the environment, for cutting down on pollution.”

Richards said they just got a bike parking ordinance passed by the city that requires new or remodeled construction to have bicycle spaces for parking.

The revised master plan comes just as Cottonwood’s only bike shop, the Verde Valley Bicycle Company is renovating. VVBC is on the proposed bike path in Old Town Cottonwood and is expanding its services to local bicyclists and tourists. Dead Horse State Park is becoming more popular for mountain biking.

The BAC bicycling survey asked people to describe Cottonwood as a place to ride.

One quote summed up the end of the survey:

“Bicycle commuting is very possible in our town, we just need development of a connected network.”

Letter: ‘Rules of the Road’ as applicable to bicyclists as to motorists
Letter: Design roads for riders as bicycling is here to stay
Bicycle advocacy in the Verde Valley
Bicycles are no longer just for kids
National bicycle representative advises local riders