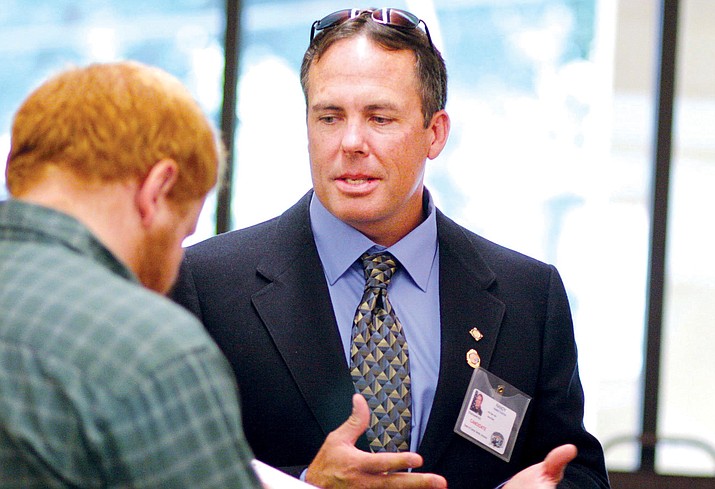 Bloomfield, New Mexico Police Chief Randy Foster, pictured at right at a May 18 meet-and-greet, told the Town of Camp Verde on Monday that due to “unforeseen family medical situation,” he would not be able to become the Town Marshal. VVN/Bill Helm

CAMP VERDE – The Camp Verde Marshal’s Office is again searching for a marshal.

But the Town’s police department is not without a leader.

Monday, Town Manager Russ Martin asked Commander Brian Armstrong to continue in the role of interim marshal, as Bloomfield, New Mexico Police Chief Randy Foster stated in an email to Martin that he would not be able to become Camp Verde’s Marshal.

“He couldn’t apologize enough for being unable to take the position, a position and location in Camp Verde that he and his family were so excited to move to,” Martin stated in the press release. “It is tough to make a decision like this, and I must respect his decision to put family first.”

“Although I feel I cannot miss this opportunity to be with my family, I also feel this is a missed opportunity in Camp Verde,” Foster stated. “We were, and still are, very impressed with the town, its direction, and its wonderful climate and geography. We sincerely appreciate the opportunity [Camp Verde] provided us and how welcome everyone made us feel.”

Foster, who had resigned his position with the Bloomfield Police Department, will return to Los Alamos with his family to help take care of his grandfather and his brother, Foster stated.

While Martin decides how to permanently fill the position of Camp Verde’s police chief, he can rely upon Commander Armstrong, who “continues to be steadfast as commander, stepping into the role of interim town marshal, as well as outstanding officers and civilian staff at the Marshal’s Office who continue to serve.”

Martin also announced that he will be “working on next steps and will release the plan to move forward on hiring the next marshal soon.”

Armstrong has served as interim marshal since Oct. 25, 2017.