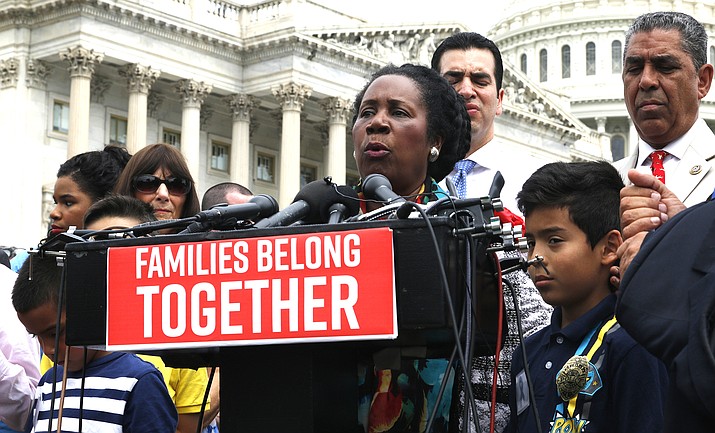 Rep. Sheila Jackson Lee, D-Texas, joined other Democrats blasting the Trump administration for its policy, later reversed by the president, of separating immigrant families at the border. (Photo by Sarabeth Henne/Cronkite News)

WASHINGTON – President Donald Trump on Wednesday ordered immigration officials to keep undocumented immigrant families together, after weeks of mounting criticism over his administration’s “zero tolerance” policy that led to the separation of families at the border.

His executive order does not reverse the zero-tolerance policy, and adults caught at the border will still be referred for criminal prosecution or held while their asylum claims are assessed. But for now they will no longer have their children taken away from them – families will instead be held together in custody.

“We’re keeping families together, and this will solve that problem,” Trump said, according to a transcript of the signing event. “At the same time, we are keeping a very powerful border and it continues to be a zero tolerance. We have zero tolerance for people that enter our country illegally.”

But Democrats – who rallied against the family separations by bringing children from immigrant communities to the House floor earlier Wednesday to put a face on the crisis – were not satisfied by the executive order.

“I don’t care how much lipstick you put on this pig. You’re not going to turn it into a silk purse,” said Rep. Raul Grijalva, D-Tucson. “There was a huge backlash on this policy, and I think it got to the point where you didn’t have a choice, he took it back, accepted the fact that he was responsible for it.”

The zero-tolerance policy, announced in April by Attorney General Jeff Sessions, calls for the criminal prosecution of anyone caught trying to enter the country illegally.

An offshoot of the policy was the separation of families that showed up at the border, since immigration officials are only allowed to hold families for 20 days before they have to be released. Rather than do that, they have been separating families and holding children in detention centers apart from their parents.

Customs and Border Protection officials said Tuesday that, from May 5 to June 9 they had taken 2,342 children from their parents after attempted crossings at the Southwest border.

Images of children being taken from their parents have made headlines and stirred opposition from a growing number of Republicans as well as Democrats.

“It is psychological torture what this administration is doing, and the Republicans in Congress are tolerating it,” said Rep. Joe Crowley, D-New York, at a rally Wednesday morning. “They are promoting it, promoting psychological torture against these young children, and it’s a scar not only on their lives but on the country we love.”

Bills have been introduced in both chambers and from both sides of the aisle with the goal of reversing the family separation policy. The Democrats who rallied Wednesday were there to support a bill by Rep. Jerry Nadler, D-New York, companion to a Senate bill, while in the Senate 27 Republican senators – including Arizona Sen. Jeff Flake and Senate Majority Leader Mitch McConnell – have signed onto a bill to keep families together.

Both Flake and fellow Arizona Republican Sen. John McCain have blasted the policy of family separation, and called on Trump to end it.

But Trump continues to insist that Congress caused the problem in the first place, by failing to act on immigration legislation that would have addressed what he called problems in the current law that put his administration “in the position of separating alien families to effectively enforce the law.”

The president said Wednesday he was not backing down in the face of criticism, but “affording Congress an opportunity to address family separation,” as the order was titled. The order said it is the administration’s policy “to maintain family unity, including by detaining alien families together where appropriate and consistent with law and available resources.”

“We will be going through Congress. We’re working on a much more comprehensive bill,” Trump said. “A lot of good things are happening toward immigration, and proper immigration. But we have to have strong borders.”

Rep. Debbie Lesko, R-Peoria, who was at the White House to discuss border regulation Wednesday, agreed that it is Congress’ responsibility to “permanently repair our broken immigration system and prevent this from happening in the future.”

“No one wants to see what’s happening at the border continue,” Lesko said in an emailed statement. “I joined President Trump today at the White House to discuss legislation that will secure our border, fully fund the wall, close immigration loopholes, and allow children to remain with their parents.”

“Unfortunately, we will continue on this path until the American people give clear direction in November as to needing this to be resolved,” he said. “The issue that Republicans are going to grab on to will be this issue, and they’re hoping that somehow it’s can to help them retain the power they have in Congress.”