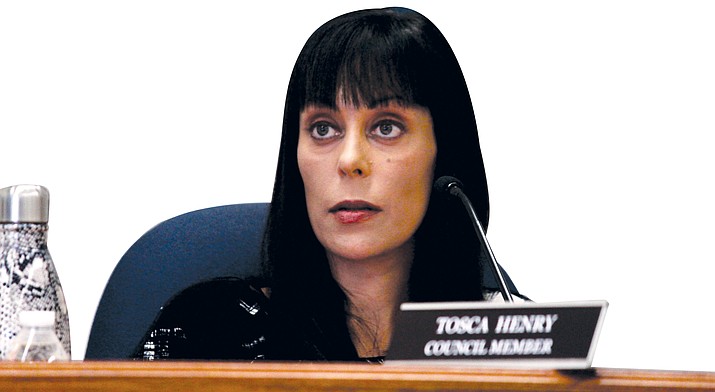 Council Member Tosca Henry said she is worried about how a lack of support from the city for OTA would look to other Old Town merchants. VVN/Kelcie Grega

COTTONWOOD -- Cottonwood City Council voted 4-3 Monday to adopt the city’s tentative budget for fiscal year 2018-19 with an expenditure limit of $69,528,685. This is $3 million more from last year’s budget.

Cottonwood Mayor Tim Elinski was the swing vote in favor of the budget along with Vice Mayor Kyla Allen and council members Karen Pfeiffer and Linda Norman. Council members Tosca Henry, Deb Althouse and Ruben Jauregui were all “no” votes.

The tentative budget was approved after months of public meetings addressing how to balance the city’s funds. The budget includes a half-percent sales tax increase. The Notice of Intent for the sales tax hike was approved by Cottonwood City Council earlier this month amid mixed public response for and against the increase. The tax will go through the final processes of approval later this summer.

“None of the items that were discussed to be added with the .5-percent will be actually funded unless that .5-percent goes through all the way and is established,” said Cottonwood Budget Manager Kirsten Lennon.

Two public hearings for the sales tax increase are set for Aug. 7 and Sept. 4 at 6 p.m. at City Council Chambers.

In the tentative budget, city staff lowered its merit program for city employees from 5 percent to 4 percent. Cost of Living Adjustment was not budgeted but the ranges will be increased by the 2.3 percent. A full copy of the budget can be found at http://cottonwoodaz.gov/ArchiveCenter/ViewFile/Item/455

City staff decided not to fund the Old Town Association in the tentative budget as the organization tries to rebuild itself. In May, former OTA treasurer Traci Koelzer fled the city after embezzling more than $100,000, according to Cottonwood police. The city had originally budgeted $10,000 for the organization.

Members of the OTA spoke to council during a public comment segment requesting continuance of the city’s support.

“We are earnest in our desire to continue the good work that has been planted many years ago and we want to make sure that continues,” said OTA board member Brenda Clouston.

Clouston, who said she is aware of the problems facing OTA, said the organization is “anxious” to implement policies and structures to ensure the same mistakes won’t be made.

“It’s important that we continue to grow Old Town,” she said. “We need to continue these events and I don’t think we can do it without the city’s help.”

The Old Town Association has still not received funding for its third and fourth quarter from the city. City Manager Doug Bartosh said with everything that had happened, he was not comfortable paying them until they were reviewed by Cottonwood City Council.

Henry said she is worried about how a lack of support from the city would look to other Old Town merchants.

“It really sends a pretty strong message to our Old Town merchants that the city is turning its back on Old Town,” she said.

Allen suggested OTA get in touch with the Cottonwood Chamber of Commerce for funding and support.

“[The Chamber] has indicated [they] were very willing to assist you with whatever manner you needed,” she said. “That was one of the reasons why I would feel more comfortable not giving you the [$10K] because [Christian Oliva del Rio] seemed like he was stepping up to the plate to help you over the hump.”

Cottonwood City Council moved to approve Novak Consulting Group to assist in the search of a new city manager.

Council reviewed a total of three consulting firms over the last few months. The fixed fee outlined in the firm’s proposal is $21,300. The funding for a consulting group for city manager is included in the city’s tentative budget.