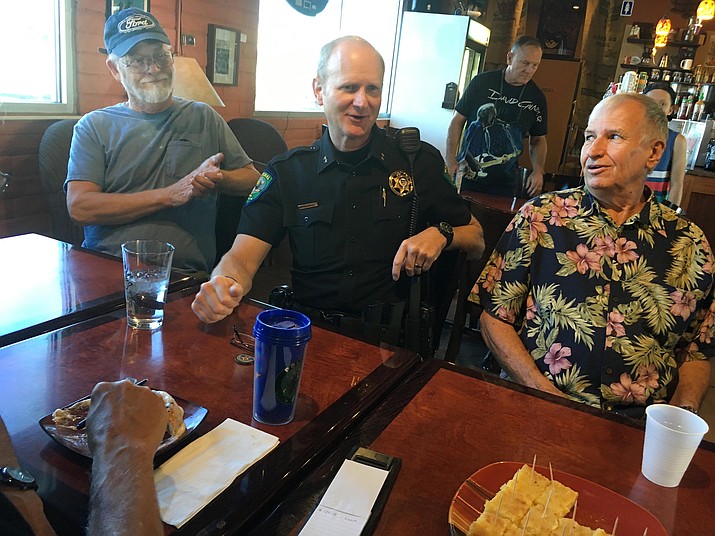 The Town of Camp Verde is now looking for its next police chief, Town Manager Russ Martin announced Monday at the monthly Coffee with a Cop. Martin also announced that Commander Brian Armstrong, who has served as interim marshal since late-October, will not be under consideration for that job. VVN/Bill Helm

CAMP VERDE -- The Town of Camp Verde is now looking for its next police chief, Town Manager Russ Martin announced Monday at the monthly Coffee with a Cop.

Martin also announced that Commander Brian Armstrong, who has served as interim marshal since late-October, will not be under consideration for that job.

For no other reason, Martin said, than the town code.

“He’s not in the right zip code,” said Martin, of Camp Verde’s code that requires its chief of police to live within the 86322 zip code that includes Camp Verde, as well as the non-incorporated areas that border the town.

“It’s not because of anything but the current code,” Martin said. “And I can’t keep putting council in this position. The rules are what they are.”

The code does not require Camp Verde’s interim marshal to live in zip code 86322.

Earlier this year, Dep. Dave Freeman with the Camp Verde Marshal’s Office was scheduled to represent the office’s Public Safety Association with a request that the Camp Verde Town Council reconsider the code. But the agenda item was pulled before the meeting. At this time, Martin does “not have a direct plan to ask council” to reconsider.

“I have to work with the town code at this time,” Martin said. “The unfortunate thing for Brian is that the purchase of his home in the Village of Oak Creek is too much for him to overcome, as much as he would like to be here.”

Armstrong, who purchased his home almost a year ago, has been with the Camp Verde Marshal’s Office since June 26.

“Brian understands Camp Verde well enough in one year that he doesn’t need to be the guy to break the law,” Martin said. “The irony, here’s the type of guy you want for this position.”

Although Martin admitted that the town code can limit “the ability to have candidates within the [Verde] Valley who are ready for the job,” he also said that the requirement, in and of itself, “is not outlandish.”

“It’s a reasonable request,” Martin said. “But the difficulty is that it limits the ability for communities like ours to pull from [Verde Valley] talent.”

On June 18, Randy Foster advised Martin that he had to withdraw from becoming the Camp Verde Marshal due to an “unforeseen family medical situation.”

“He couldn’t apologize enough for being unable to take the position, a position and location in Camp Verde that he and his family were so excited to move to,” Martin stated in the June 18 press release. “It is tough to make a decision like this, and I must respect his decision to put family first.”

Armstrong was one of 23 candidates who applied for the job that was offered to Foster in May. Martin said he will reconsider each of the candidates and “look for more” with the new search for a marshal.

“At this time, I believe the best option for the future of this department is to consider a new process that will allow review of additional potential candidates to include the ones who have already applied for this very critical position,” Martin said. “Once additional candidates are added to those originally filing, a similar review process will be completed to obtain a new Town Marshal,” Martin said.

Armstrong will continue as interim marshal until the Town hires his permanent replacement, Martin also said.

Coffee with a Cop is held on the fourth Monday of the month at Thanks a Latte, located at 348 S Main St. in Camp Verde.