Gulch Radio now accessible by Internet only (with video) 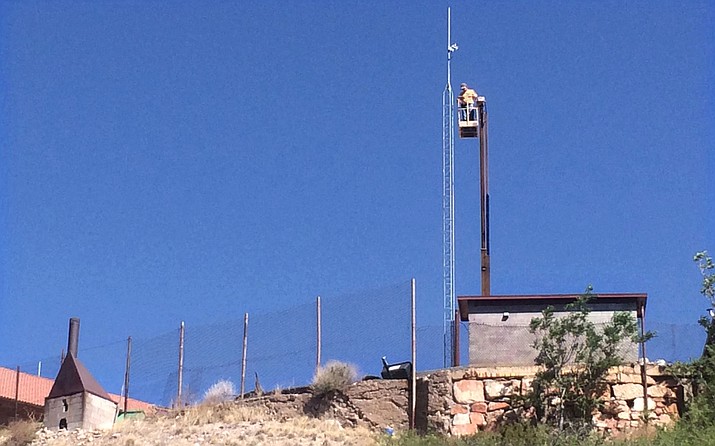 JEROME -- The “sound of silence” is the only thing you will hear if you tune into Gulch Radio on your radio. And it’s not the song.

Friday morning with these words, owner Richard Martin took the community radio station off the Verde Valley airwaves: “We got to sign off and take down the antenna and that’s what we are going to do.”

This KZRJ-LP, FM 100.5, Jerome, Arizona. Broadcasting under the authority of the Federal Communications Commission at the power of 100 watts, 24-hours per day, Martin said.

“You all have a wonderful day. Bye bye.”

Martin also reminded listeners that they can still listen to The Gulch on the internet 24 hours a day, seven days a week at gulchradio.com.

Martin said they are moving the antenna and transmitter because the Jerome Gulch’s lease is running out at the end of June at the old Jerome High School, and the landlord will not renew the lease.

The 100-watt transmitter and small antenna for the community-licensed radio broadcast are located at the old Jerome High School and the signal is sent out to the Verde Valley. The radio program is first transmitted from Martin’s house in the Gulch to the transmitter at the old high school.

Martin’s partner in the radio station, Chuck Ruynon, was in a bucket truck on Friday taking down the antenna and small tower.

The new transmitter will be located at another piece of land owned by Martin in the Gulch, he said. It’s also close enough to run a line directly to the transmitter.

The new location will be better, he added, because the radio station will own the property and they won’t have to lease it.

Martin said that he has received between 300 and 400 emails of support to continue the radio station, but realized it was going to take funding to move the transmitter, including all the engineering, FCC applications and hardware.

Martin never liked the fundraising aspect of the broadcast business. He provided the initial $15,000 investment to get the station off the ground four years ago, but now says he will accept donations to get the station going again.

“We would like to keep it on the air and we would like to think the people in the Verde Valley like it enough that they would be willing to help support it,” Martin said. “Our whole reason we built this was to put music in the Gulch.”

Martin said he has a button on the Gulch Radio website where people can make donations, which recently prompted a donation for a gulchradio.com listener from Wales.

A fundraiser was held for the Gulch Radio last Saturday, which included members of the Jerome Ukulele Orchestra, CattyWampus, Latobo and other local musicians. People who are interested can go to Gulchradio.com or savegulchradio.com