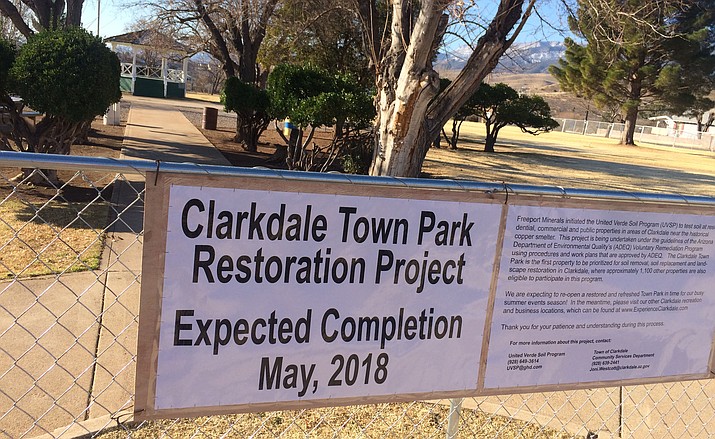 Categorized as a “Tier 1” property, the Town Park on Main Street is the first priority for remediation. The park was fenced off on Wednesday in preparation. The 10- to 12-week project is expected to be complete sometime in May. VVN/Vyto Starinskas

Verde Valley Wine Festival to relocate due to soil remediation

CLARKDALE – The Verde Valley Wine Festival will be relocated from its usual location at the Town Park due to the ongoing soil remediation process by Freeport Minerals. The festival will take place at the Clarkdale Town Complex, while the scheduled Saturday main event date of May 12th will not change.

The festival will take place at 39 North 9th Street, behind the Town Hall building on the newly-built patio, formerly the Clarkdale Pool. The VIP section will be in the Men’s Lounge.

The festival will be slightly scaled down this year due to space limitations – there will be approximately 35 to 45 vendors instead of the usual 55 to 75 range. Instead of 2000 people the number will be cut down to 1500.

Festival Director David Baird says people should not be discouraged from attending the festival, and that the change of location may enhance the experience.

“It’s not the best of circumstance, but all things considered it’ll work just fine. The architecture is amazing…a big patio overlooking the national monument, the views will be nice,” Baird said.

Baird says the festival will balance the limitations in space with providing a positive experience for both vendors and attendees.

Freeport Minerals began the United Verde Soil Program to test areas near the historical copper smelter – several of Clarkdale’s parks will be remediated in the process. The Town Park is categorized as a “Tier 1” property under the program, making it a high priority. The remediation is expected to begin March 2 and estimated to take 10 to 12 weeks.

The process should be complete in time for the festival, but Baird says it is better to be safe than sorry.

“The Town has been great to work with – they knew there weren’t bringing good news,” Baird said. “They’ve been very helpful.”

More information and ticket presale is available at: http://verdevalleywinefestival.com/

CLARKDALE – Town Manager Gayle Mabery gave the Town Council a break-down of the ongoing park remediation at the regular council meeting on Tuesday.

Mabery noted that the Town has “some time” to remediate the parks within the next three years. The town also plans to look into some potential improvements to the parks as they are remediated.

Freeport Minerals will restore all landscaping in addition to the remediation.

Categorized as a “Tier 1” property, the Town Park on Main Street is the first priority for remediation. The park was fenced off on Wednesday in preparation. The 10- to 12-week project is expected to be complete sometime in May.

The concrete slab in front of the gazebo was previously slated for replacement, which will now be done during the remediation process. The gazebo itself and other permanent structures, such as the sidewalks, will remain in place. The Town stated in a press release the historic appearance of function of the park will not be altered by the soil replacement.

The sand in the playground area at the Town Park was found to have concentrations of metals “below ADEQ’s residential clean-up levels” and will not require remediation. The sand was added long after the smelter operation ceased.

The Town hopes to complete the park before the major event season in Clarkdale.

While closest to the former copper smelter, Caballero Park was found to have metal concentrations below the Arizona Department of Environmental Quality’s clean-up levels – not requiring any remediation.

The two parks were determined to be the same priority as other residential clean-ups. Mabery told the council the park and ballfield will be scheduled for remediation, but won’t be prioritized.

Councilmember Bill Regner questioned if the process will take care of the goat-head problem on the ballfield.

“I think this will help,” Mabery said.

A leased property, Mongini Park is not actually owned by the Town of Clarkdale. However, the owner has designated the Town to work with Freeport Minerals in the remediation process.

Half of the park needs remediation and will scheduled in the same process as Centerville Park and Selna Ballfield.