Mingus considers contract for consolidation feasibility study
Jack Keegan: ‘A lot of money sitting around that could be used’ 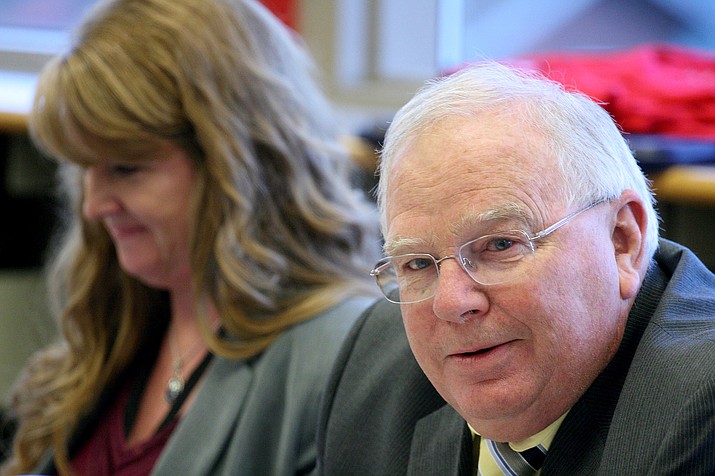 For the 2017-2018 school year, Mingus Union High School will implement a zero-period to run its AP Calculus class. “We were able to start the class earlier in the day to not impact class sizes of the other math classes,” says Dr. Jack Keegan, right, the school district’s interim superintendent. (Photo by Bill Helm)

Cottonwood — When he was interim superintendent at Mingus Union High School, Dr. Jack Keegan gathered information as it pertained to the district’s possible consolidation and unification with Cottonwood-Oak Creek School District.

Though a recent study by Mingus Union and Cottonwood-Oak Creek business managers pointed to both short-term and long-term costs that more than offset savings, Dr. Keegan says that his study suggests “a lot of money sitting around that could be used” if the two districts were to merge.

Regardless of savings either perceived or actual, Dr. Keegan said.

that to make a consolidation work, staffs at both schools would “have to be brought up to comparable wages.”

“If not, you’re not going to have a happy marriage,” Dr. Keegan said.

Before deciding whether to engage Dr. Keegan in further discussion, the Mingus Union school board will discuss the findings by Mingus Union Business Manager Lynn Leonard and Cottonwood-Oak Creek Director of Business Services David Snyder.

Both Snyder and Leonard say in their conclusion that the estimated cost of merging the two districts could be more than the possible savings in the elimination of jobs. Snyder told the Advisory Committee for Consolidation on Feb. 20 that the study was “one way to consolidate a district.”

Also Thursday, the Mingus Union school board could discuss whether the district could become more efficient and save more money during consolidation discussions.

The Mingus Union High School District governing board will meet at 6 p.m. Thursday, March 8 at the school’s library, located at 1801 E. Fir St. in Cottonwood.

The district will post a copy of the official agenda no less than 24 hours before the meeting.

The district can add, change or remove items from its draft agenda prior to the official agenda’s release, no later than 24 hours prior to the meeting.

The district’s regularly-scheduled meetings are typically held at 6 p.m., unless otherwise noted.