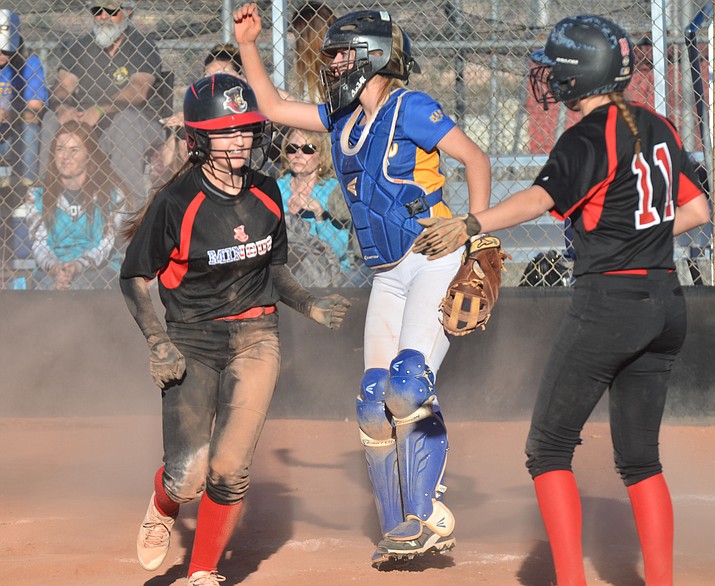 Mingus Union softball gained some revenge on Tuesday with a rout of Prescott at home.

Last season the Badgers edged Mingus by a game to win the 4A Grand Canyon region championship.

“I’m real happy,” Mingus head coach John Brown said. “That’s last year’s region champ and they took the region from us last year, so to win and win the way we did.”

Mingus senior pitcher Kaycee Williams (1-0) threw a one hitter and struck out 10.

“We’re young and we show it sometimes and just like I told the girls, they play pretty well but they give up some mistakes and we didn’t hit,” Prescott head coach Randall Bryan said. “Obviously the pitcher did a great job and we looked a little bit confused at the plate, didn’t really get it done, we didn’t really put a lot of pressure on them, so it makes it pretty easy.”

Williams started the game with a three strike outs in the first inning and then Mingus senior Nikki Zielinski led off with a stand up triple. Williams drove her in with a double and then sophomore Jasmine Shults drove her in.

“We were really prepared to come in because we wanted to take it from them just like they took it from us last year,” Williams said. “I’m proud of my team and how they did today.”

Sophomore Izzy Chacon got the Badgers’ hit, a double.

Mingus led 4-0 in the top of the fourth when the Badgers drew consecutive walks but the Prescott rally was snuffed out with a double play.

“It goes back to a lot of times experience in that type of situation and that’s probably where we hurt ourselves the most,” Bryan said. “It’s just like understanding what’s going on in the game and trying not to let it get too big for us or get too fast for us and we’re not there yet but they’re a great group of kids and they work hard and they really try hard and they’re going to better.”

In the home half of the fourth the Marauders added two more runs, including a solo home run by Zielinski.

“It was a big win, it’s our first game with the region, so it was a good day to come out and play good,” Zielinski said.

The Marauders scored three runs on errors and two on wild pitches.

“We’re taking advantage of any mistakes and making them throw the ball,” Brown said. “We get out a couple of times doing that, but most of the time we’ll make a steal that we didn’t plan, it just happens and the other team just goes ‘what was that?’”

Brown said they didn’t run the bases more aggressively because they were playing a young team.

“I just approach it the same,” Brown said. “It’s our game, the way we play the game So I always tell them, they ask who we’re playing and I say ‘the little yellow ball.’ So it’s how we play the game, I don’t care what the other team is or what they do.”